Hi all,
This gun was given to my grandmother by her brother that served in WWII. I've noticed it sitting behind the door in her house for some time and decided to take some photos. It looks like an M1 Garand, but I can't seem to find too much about "Golden State Arms M-59". Can anyone help me identify the age of this gun and what something like this would be worth?! Or at least better point me in the right direction?
Thanks!
wavo 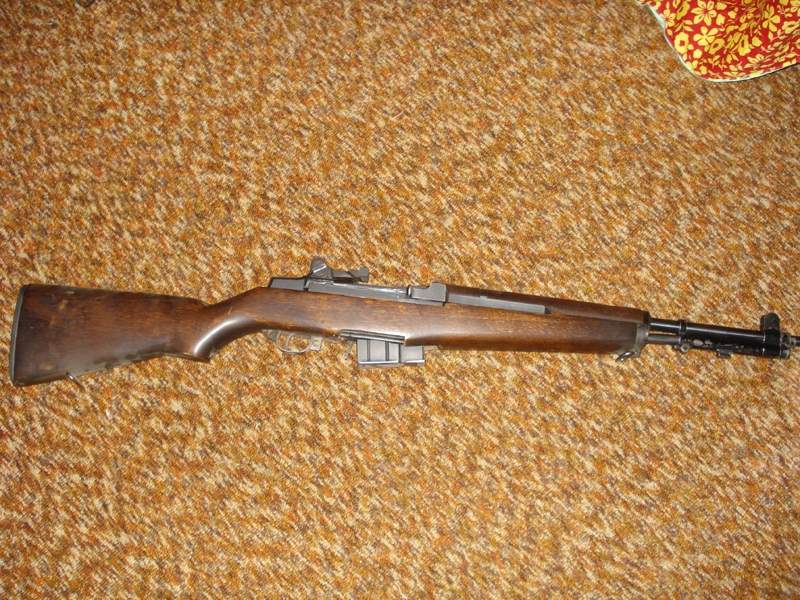 What a weird variation...

Not only the fact that it's 7.62x51mm NATO, which dates past WW2..
...but, the extended magazine, which I'm assuming is detachable because of the lever between the trigger guard and the magazine, like an M14?
Of course, the short stock, like a tanker M1G, and the M1G sight and barrel.

What is the ammunition capacity?

It's like an M1 tanker and M14 designs were merged and created some weird hybrid offspring.

I know quite a few M1s were rechambered to .308 after the war.
OP
W

I didn't get a chance to check the mag capacity, but it is detachable. I am probably going back up over Christmas so I'm hoping to take a closer look, and maybe buy it from her. The 7.62 is what threw me off too!

Thanks for the replies so far.

There is also a M59 Trooper that was made by Santa Fe Arms division of Goldent State Arms. The were made in the 70's from what I know of them. I had one recently, picked it up for $600. It had a SA Garand receiver made in 1944, and the barrel stub of the original barrel re-lined, so to speak, with a donor 2-groove 1903 barrel that had been shortened and had the appropriate threads/journal/gas port to accomodate the garand gas cylinder. Most were made from welded receivers, some like mine were not. All of them required that the receiver be annealed, some weld added in the follower area to beef up the receiver, machined to BM-59 specs, and re-heat treated. The balance of the parts on them were either BM59 (like the magazine release and bolt stop) or modified Garand parts (like the operating rod). I don't think I would pay more than about $750 for one as the 2-piece barrel arrangement could end up being bad juju - and there is no direct replacement parts for the magazine retaining pin assy - it is not a standard BM59 part, it was something that Santa Fe made especially for their rifles.

Found this on another forum (NJC/NJO): In 1964, Golden State Arms, Pasadena, CA, began offering the "Santa Fe" BM59, or "M59". While most, if not all of these were built around re-welded receivers using the 03 barrels, they did obtain licensing from Beretta to manufacture them. You will see these rifles either with the Beretta Licensing agreement, or without it. Although marked with the Beretta licensing information on the left hand side of the receiver, the buyer should still remain aware that these were built in Pasadena, CA., and NOT at the Beretta factory in Italy. At this point, I am unclear as to why some of the Santa Fe Arms rifles are marked with the Beretta License Agreement, and some are not. I think that it is quite possible some of the earliest are not marked, and that the later ones are not so marked, possibly because Beretta was not happy with the quality, as indicated by a few writers. One additional note about the Golden State/Santa Fe, I have heard one reputable gunsmith say that some of these were actually imported. I have seen photos of an M1 Garand that was marked with Santa Fe/Golden State markings that I believe most probably was an import, but never have I seen a Golden State BM59 that I believe was an import. Most probably, any Golden State/Santa Fe you see will be a re-weld. Re-welds were also built by National Ordinance and Federal Ordinance.

wavo said:
I didn't get a chance to check the mag capacity, but it is detachable. I am probably going back up over Christmas so I'm hoping to take a closer look, and maybe buy it from her. The 7.62 is what threw me off too!

Thanks for the replies so far.
Click to expand...

Oh yes, most definitely post WW2, considering the round it was chambered for wasn't fielded until the early 50s.

As above, it is a converted Garand. Looks like a Beretta BM59 magazine.

What does the top of the receiver heel read?

bcp pretty much nailed it - the M59 is a Golden State Arms build up using garand and other components. It's essentially a sporter carbine build from surplus parts for the commercial market.

Deep in the heart of Dirty South Salem

This is a BM59 put together by Santa Fe.

It is supposed to mimic an Italian Beretta BM59 Alpine rifle.

There is supposed to be a compensator grenade launcher with it.

Reeses Surplus has parts for those to make it all correct.
OP
W

Wow thanks for all the info!
@ch139 When I get home I'll have to look at the pics I took and see if I can read it.
T

Those info quotes looked familiar to me

Yep, Golden State Arms. They were located in Pasadena and imported and subcontracted various firearms from Europe and Japan. These guns were re-branded with their name.
O

The first 59s were made by Beretta using M1 Garand receivers and fore
runners of the M14s. Golden State were mainly importers of all kinds of
stuff and sporterized military rifles, some questionable. The import stamp
I guess can be either on the barrel or receiver I guess. If there are no
markings or serial number behind the rear sight, I suspect it is a reweld.
If so have it checked before using it. Also means someone also put it
together with unknown skills. I have seen three reweld Garands in my
area, with two being used unaware by the owners. Seem to operate
OK, but I just don't trust the unknown.
Not knowledgeable on 59s, but I know there are several versions of
it including an evil handgrip behind the trigger guard. It does look like
my Garand Tanker with a magazine
OP
W

Ok, I found the paper I wrote on with all the markings of the rifle.

Behind the rear site there is no company name or anything just these numbers:
1539844