I don't usually sell my guns, but this is a nice rifle that I just don't need and I'd like to sell this to fund a long range precision bolt gun project. So, I'm willing to part ways with it if I can get a fair price while I currently have an opportunity to buy the other platform.

This was built as a light weight hunting rifle and comes in at 7 pounds 6 ounces without magazine or optic. With the highly capable Zeiss Conquest V6 in the Geissele mount it comes to 9 lbs 1 oz unloaded (as measured by my cheapo food scale). While I've shot the rifle a few times and started playing with load development, I can't say I've even broken in the barrel yet and haven't made it too far in load development so I can't make any claims on accuracy. I probably have shot between 100-150 rounds, and maybe not even that many. I selected and purchased all the components and assembled the rifle for my own use. I'm not a gunsmith or dealer.

The heart of the rifle is Wilson Combat 18" Tactical Hunter barrel in a 2A Xanthos Receiver Set and Handguard with many high end and light weight components as detailed below. While I'm not looking to part out the rifle, I'll entertain swapping out / removing a few things if they just don't fit your requirements.

Overall, everything is in excellent condition as it has spent most of its life in my safe, but it has been fired a few times so you'll see normal wear in the usual places (e.g., anodizing scratch where the charging handle latch engages).

I'd like to get $3,900 for the whole package with optic, or $2,300 for rifle only, which is less than I have put into it and many of the components just aren't available right now. Let me know if you are interested in just the optic. 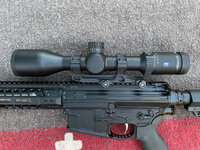 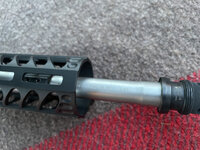