Geardo said:
It’s utterly bizarre how fast it was all dropped.
Click to expand...

308 said:
That usually happens when too many inconsistencies are exposed to the light of public scrutiny
Click to expand...

It is interesting how these stories go silent and the general public never thinks if it again. This one is particularly bizarre and some of the theories point to government involvement.

308 said:
There are some who know the distinctive sound of a belt fed F/A as well as the sound of a semi-auto/bumping AR variant and there is/was pretty clear and convincing audio demonstrating such…like from the cab driver. Odd things like people apparently being mowed while video shows folks over at the food booth standing around waiting while the cook finishes their order. Don’t want to talk about the black clad ninjas running along the roof of the building in the event space…that’s all whacky talk ya know.
Click to expand...

Having spent years using bump firing and especially bumpstock firing I call total BS on that argument. 900-1000 rounds per minute are completely doable with bumpstocks. In many cases you can fire faster "semi auto" than you can with a traditional full auto. Depends on the gun. My SIG Rattler with an FRT will handily outrun an MG42.

As far as the brass he was firing from an open wall sized window. I dont know where your AR brass goes but mine goes 2 oclock. It would have gone right out the window.

For conspiracies to work more than one person has to be able to keep a secret.

Nick Burkhardt said:
5 years ago and still no answers.
Click to expand...

I heard they just reopened the Tupac investigation and that was 26 years ago. Seriously. Plus, they know who did it.

Vegas is family friendly and they need all the European and Asian tourists to believe it.

Bump stock ban, how convenient! Who EO'd the ban and why? Was it done by a "good guy"?
S

The report says Paddock did not belong to any political organizations, did not comment on gun control did not display any racial bias.
Click to expand...


Quote:
In a jailhouse interview with police and the FBI, the man said Paddock called Federal Emergency Management Agency "camps" set up after Hurricane Katrina in 2005 "a dry run for law enforcement and military to start kickin' down doors and ... confiscating guns."
Click to expand...

so paint him as a conspiracy wack job, check


Quote:
The man, whose name was redacted in reports released Wednesday, quoted Paddock saying somebody has to wake up the American public and get them to arm themselves.
Click to expand...

so you shoot the bubblegum out of helpless people to show how they need to be armed? check 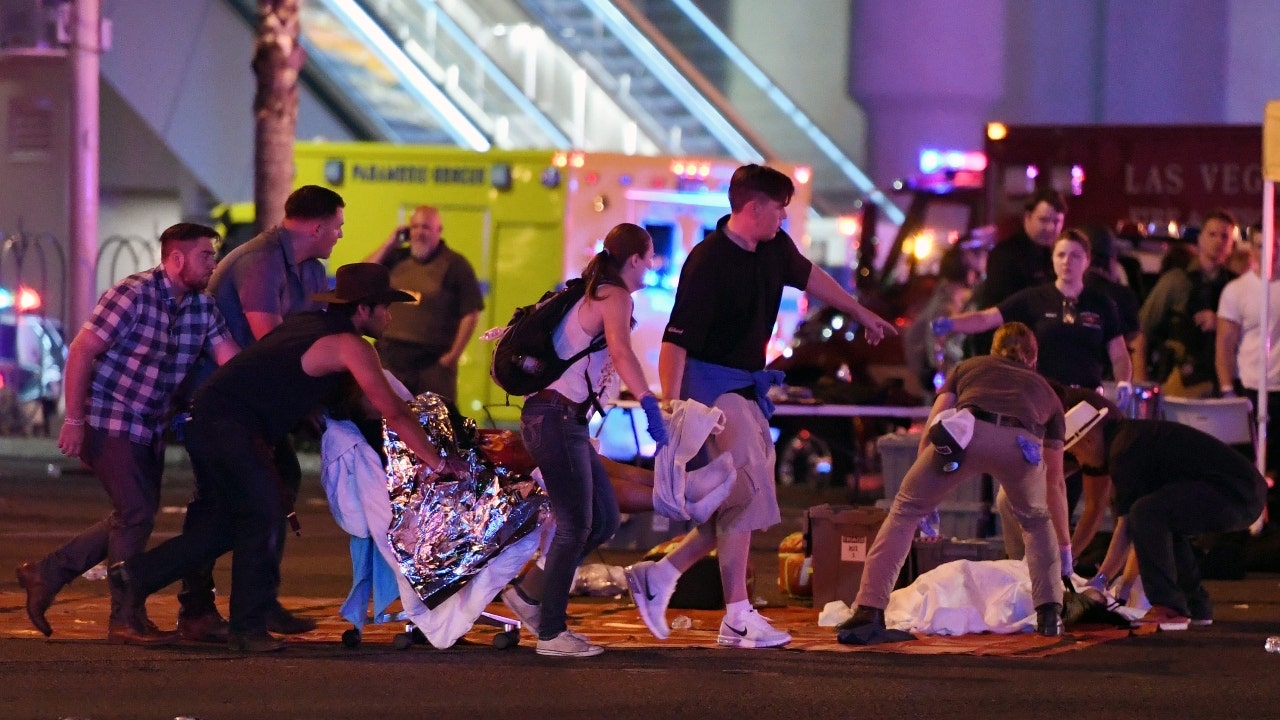 A retired Las Vegas police officer reflects on the heroism displayed during the Oct. 1, 2017, shooting into the Route 91 Harvest Festival that left a total of 60 people dead.

So then......
Modify your vehicle (even legally). Get more hp and more speed. Intentionally crash it into a crowd on the sidewalk. And any "victim" can now sue the car's manufacturer?

Yeah......what was I missing about the lawsuit?

“bump stocks” were “legal” at the time & could not have been the “illegally possessed prohibited firearms” mentioned in the FBI report. So what weapon/s are they referring to?


said they were bumpstocks

(and thus weren't machine guns until after the bumpstock rule?)

I have read that the LV journalist that was recently murdered was investigating the LV shootings AGAIN. Apparently he had some new and more stories where it did not ADD UP. Plus so much was NOT what the 'news' stated it to be to all of the people involved from a to z.

Especially where the shooter's girl friend went to AFTER she was interviewed and let go. Did she really go back to the PI? Back to Dubai again? Was she an agent herself?

LOTS of people said that there was more than one shooter too. Not just a couple of them.

LOOK at the man's past. IT still does not ADD UP and hardly any people bring up his background, his former job/jobs, his TIES, his money, his holdings including in RE, his travels, his planes, his gun buying/selling, gun running or was he a friend of ERIC HOLDER'S (Fast and Furious deal.) or some other high .gov official in another AGENCY or was he in a more COVERT OPERATION, etc.?!

I will have to hunt for the one man's name who did some of the most thorough stories, interviews and investigations. It may be in an OLD closed up or moved thread. There were a few of them here and elsewhere.

The investigator man who had many stories, interviews, real footage, and videos/links died (Heart attack - sudden one.) but his work was still ONLINE for some time after his death. I do not know if his family finally removed it all and his website.

There is a heck of a lot that does not ADD UP and I still do NOT believe the BS story that was given out by the authorities (ALL sides!) and the MASS MEDIA.

"Don't piss down my back and tell me it's raining."

That IS what I would tell the mass media and all of the authorities who constantly CONTRADICTED THEMSELVES until they got their 'story straight'! LOL 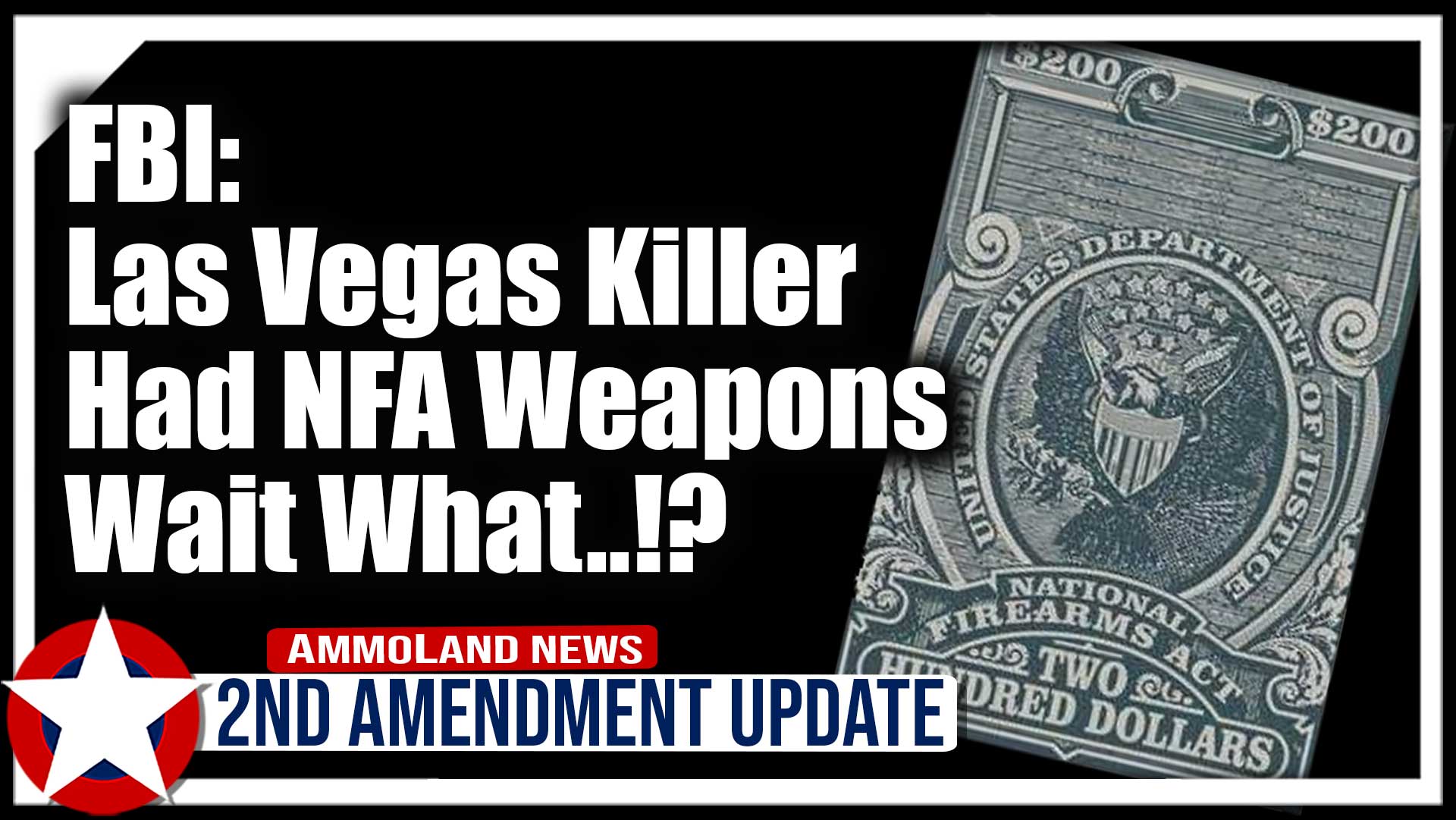 Media tells us that bump stocks were the catalyst in this horrible act, but FBI referred to “prohibited firearms” as being the weapon of choice?

Assuming everything happened as they said it did - I wonder (at the very least) why they didn't study his brain. They do this on former NFL players.

I've always thought mass shootings were related to the suicide phenomenon. Suicide has skyrocketed in recent years, something nobody talks about.

Media tells us that bump stocks were the catalyst in this horrible act, but FBI referred to “prohibited firearms” as being the weapon of choice?

Looks like another case where facts are uncomfortable for the government and the truth is expendable for the media. Even here in this story, no one has come out and said, automatic firearms were used. Why dance around when the result doesn't change? Just the narrative.

Yesterday on TV I saw a preview of the upcoming episode of FBI-Something-or-Other...
... While looking at a couple of spent 12 gauge shells laying at the scene, the investigating agent announced with intense authority, "Those are from an ASSAULT SHOTGUN!"

Who brings 2 dozen weapons of various calibers (bolt guns?) and risk exposure when 2 -( maybe 3?) would do?
Never mind me... I'm too focused on missing transponder pings and the sounds of 7.62 belt feds...
Did you know - in the rush... no corollary post mortem bullet retrievals were ever matched to any gun?
Not that they tried... They just never saw the necessity.

Because of the results of the last election…

And another mass causality shooting
2