IG report: ATF slacked on protocols, Resulting in thousands of firearms and parts being stolen from them

Slicky boy got ‘em. And these nitwits are the “regulatory authorities” for Us? 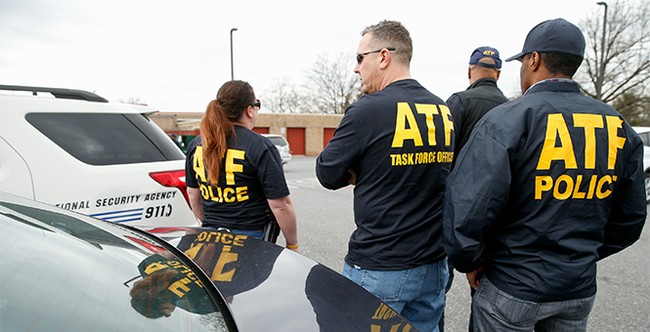 Rules for and laws for citizens, but not for us!! The BATF is a JOKE to say the least. Typical Government employees at their finest.

For three years, lax security measures and violations of standards led to thousands of guns and parts being stolen from the facility. Those firearms, including machine guns, were illlegally sold off.
Alcohol, Tobacco, Firearms and Explosives (ATF) facility, was sentenced today to 168 months incarceration for stealing firearms from the government.

Yates, age 52, of Martinsburg, West Virginia, pled guilty to one count of "Possession of Stolen Firearm" and one count of "Theft of Government Property" in April 2019. Yates was a contract employee at the ATF's National Disposal Branch in Martinsburg, West Virginia. From 2016 to early 2019, Yates stole thousands of firearms, firearms parts, and ammunition. Yates sold much of the property to others across the country. The crimes caused ATF to issue more than 1200 referrals across all 25 ATF field divisions in 49 of the 50 states, District of Columbia and Puerto Rico. To date, ATF has recovered 4,625 pieces of the stolen firearms and parts, including 4,000 firearms parts, 3,000 of which of were slides, and at least 15 rifles, 80 handguns, including ATF duty weapons, 10 to 15 AR-style lower receivers, and four machine guns.

REMEMBER!!
During Operation Fast and Furious between 2009 and 2010 ATF, under direction from the Department of Justice, purposely sold thousands of AK-47s and other firearms to Mexican cartels and allowed them to be trafficking into Mexico. They then lost track of the firearms until they showed up at bloody crime scenes. One of the firearms from the operation was found at the scene where Border Patrol BORTAC Agent Brian Terry was murdered in 2010. Hundreds of Mexican citizens were killed as a result of the operation and a .50 caliber rifle, which was deliberately sold by ATF, was found in the hideout of Sinaloa drug kingpin El Chapo Guzman in 2016.

Damn, they threw the book at that one guy. I guess to try to mitigate the embarrassment. Sounds like some people should have been fired but of course that did not happen.

What's Eric Holder been up to?

titsonritz said:
What's Eric Holder been up to?
Click to expand...

Should be in prison...

Alexx1401 said:
Damn, they threw the book at that one guy. I guess to try to mitigate the embarrassment. Sounds like some people should have been fired but of course that did not happen.

When in doubt, it's the contract employee's fault, not the people they work for. *sarcasm intended*

bradsteen said:
When in doubt, it's the contract employee's fault, not the people they work for. *sarcasm intended*
Click to expand...

Yep, temptation was great I am sure. Although I doubt the moron selling the stuff thinks it was worth it now. He certainly made the VERY stupid choice but, some of those who made it so easy for him should have had to pay too. Of course I am sure none of them did.

Alexx1401 said:
Damn, they threw the book at that one guy. I guess to try to mitigate the embarrassment. Sounds like some people should have been fired but of course that did not happen.

Perp was a contracted guard, not an actual ATF employee. Had he been an ATF employee, he would have been relocated and given a promotion within six months.

nehalemguy said:
Perp was a contracted guard, not an actual ATF employee. Had he been an ATF employee, he would have been relocated and given a promotion within six months. Welcome to our "do as I say, not as I do" government.

Prosecute you if someone breaks into your home, steals your firearm, uses it in a crime, strip away everyones rights because of it, but the alphabet.... leave the doors open, watch them walk out by the 1000's, every single one of them into the hands of criminals and they are exempt.

And we are supposed to repect their self appointed "authority"?

Yesterday at 7:47 AM
Stomper

Today Is Final Day To Buy A Firearm And Have Any Chance At Three Day Release.