solv3nt said:
I don't know about the rest of the inebriates on here, but I don't want to know what you do with your fish. What happens in your kayak, stays in your kayak

solv3nt said:
If you do a piss poor job netting a coho, it will, given the chance, jump out of your kayak.
Click to expand...

Caveman Jim said:
Whenever in doubt get a bigger net.
I always carry two, one with a 4’ handle big hoop for them BIGGGGG fish and one with a 6 foot handle with smaller hoop for them smaller fish.

Well, the issue is that the fish got caught on the outside with the hook, so the fish wasn't "in" the net.

I must admit though, it wasn't as bad as my previous trip where I forgot my net in my truck and lost a fish due to not having a net.

Caveman Jim said:
Whenever in doubt get a bigger net.
Click to expand...

Whenever in doubt... get a new fishing buddy... or hide the beer.

What size net is appropriate to catch your cell phone when you lean too far over the gunnel?

Yarome said:
Whenever in doubt... get a new fishing buddy... or hide the beer.
Click to expand...

Considering I was in a single kayak, I'm SOL with that other idiot.

The old timer who taught me to fish for Salmon in the Columbia River always used a custom gaff hook, until they were outlawed in Oregon.
He would slip the super sharp point under the center point of their lower jaw and yank the fish into the boat before they knew what happened.
I never saw him miss a fish.

solv3nt said:
Well, the issue is that the fish got caught on the outside with the hook, so the fish wasn't "in" the net.

I must admit though, it wasn't as bad as my previous trip where I forgot my net in my truck and lost a first due to not having a net.
Click to expand...

I remember a fishing trip time a long time ago that had a similar, but not so similar outcome.

My buddy and I were sitting in my little 16 foot open boat anchored in the upper Chehalis river after steelhead (when they were still abundant here). It was colder than a witches boob and a brass bra that day even with the two burner propane heater going full blast.
My buddies rod gets slammed and its a big ole hook nosed fire truck Silver (14#’s respectfully). It obviously did not want to come into the boat, much less getting in the net and let me tell ya it was a Chinese fire drill. It wrapping around the anchor rope not once but twice. After what seemed like a 10 hour marlin or blue finned tuna fight it came alongside the boat for the sacrificial netting attempt. Mind you I said attempt, lol, it had these big ole gnarly teeth, reminds me of a chum salmon after it’s been in the river a while.
Well ole caveman stabbed at it three times and missed, the fourth time I was just going to lift up the net after the fish was in the net and it decided it was having none of that and hopped out of the net and those big ole gnarly teeth got caught on the outside of the net. I tried rolling the net to get the fish in it but it would avoid my attempts so I said bubblegum, it this bicth is coming in the boat one way or another. So I lifted the net and the fish, which was hanging freely over the gunnel and it went nuts when it hit that freezing floor but at least it was in the boat.
Spent, both of us sat for a moment and let the fish beat himself up thrashing around, it was a bloody mess and I laughed my butt off as my buddy, which is basically a one armed man tried unsuccessfully to hit that fish in the head with the fish bat. Lol
Folks this is one of the stories I will tell my grandchildren when they get old enough to brave winter steelhead fishing with their grandpa, you gotta keep them entertained right. Lol

solv3nt said:
Buddy caught this, I told him it's one thing, but he's convinced it's a different one.

I think tail peduncle and tail shape are probably the diagnostic features along with the other stuff makes me think it's a coho.

Adult ID Guide Knowing how to identify adult coho salmon, steelhead, and Chinook is a critical skill for anyone fishing waters where these species coexist. In some areas, such as the Russian River, coho and other salmon species are protected, and catching or harming one can lead to penalties and... 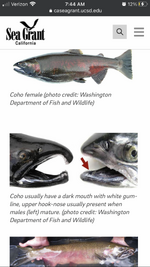 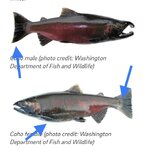 I heard that Orange County Ca publishes helpful guides on that. 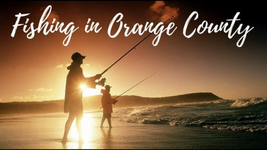 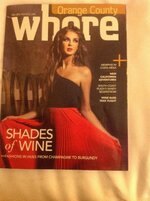 Little help....do i have this priced too high?

this just might be better then catching a Salmon.