How has your EDC changed over the years?

I went from Glock to Sig…..

Still playing around with the best/most comfortable way to carry a fixed blade.

Changes with my waistline.

bradsteen said:
Like the title says, how has your EDC loadout changed over the years, and why? Talking about the gun as well as the rest of the stuff you carry.
Click to expand...

To me it has come down to standards: How far away must I be able to hit in the known situation?

On duty it was simple. A pistol that could hit as far and accurate as possible. That was the 1911. Could bang steel silhouettes out to 200 years 8 out of 10 times.


Still have all those pistols, if I ever want to use them. No further plans to “change” anything on my EDC.

Over a long carry history there have definately been some changed, but the most significant I would say has been a shift in my carry selection criterea. Moving more away from carrying a heavily invested personal favorite VS only carrying a simple tool suitable for the job.

That shift basically came from having a firearm detained by LE through the course of their investigation. By the time I got my pride and joy returned to me, it was in pretty rough shape. Obviously they don't clean your firearm after use for you, it was covered inside and out with powder crap that had stuck and dried in every conceivable nook and cranny. Had tape and sticker residue that wasn't much fun to clean and had obviously been banged around and returned with some dings and scratches. The back sight had even been banged of out of alignment.

From that experience, I switched to basic out of the box "throwaways" (Glocks). I have no emotional attachments to them, I'm not heavily invested in them... so if they are abused in some way I really couldn't care less. They are reliable, I am proficient with them in their native form and are a dime a dozen to replace.

Not that I still don't carry some of my treasures from time to time. When you get all gussied up for a special occassion or whatnot, it's still nice to feel "special" by putting on your "best"... like your lucky pair of boxers.

Less of a factor, but sizes and, to some extent, calibers can still vary depending on attire and situation. Glocks are kind of an advantage for that too since there is more uniformity in function and feel over swapping out firearms of different makes and models.

Didn't really read the whole thread but my ecd has gotten better.

I carried the Glock around town because it was so light. But I couldn't shoot it worth a [email protected] I finally realized I couldn't shoot any light weight guns well, even if they were full size. There's a slight tremble in my arms when I extend them. It's too slight to notice, but matters with light guns. Heavier guns have enough inertia so they quench the tremble. So I sold the Glock. The first time I handled a 686 I loved the heavier weigh and the muzzle heavy balance, even in a snubby. So I scarfed up the 686 snobby and sold the Ruger snubby. I haven't done any serious hiking or camping in a while. My physical energy goes into gardening and plant breeding rather than camping or hiking these days. And that requires too much bending over and crawling around for a 6" revolver to be comfortable or nonobvious as an EDC. I carry the 686 snubby in a fanny pack when gardening or plant breeding.

we moved out of the valley sometime after my account was created. so no longer pdx.

lived and worked in clackamas actually.

way back in the day, the boys used to joke…

no this was WAY back in the day. before oregon city had breweries and latte shops. and before sellwood was california lite, and before antifa and proud boys were even dreamed of.

anyway… boys used to joke, “if you’re north of sellwood, carry something that starts with a 4.”

get it? that was funny. it described both the perceived threat level by location and took a swipe at 9mm and .38 special at the same time. it was an “all gear all the time” every day lifestyle.

now i was working LE at the time. and i was , in fact, the only non-female officer to carry a 9mm. true story.

now that i’ve moved, and mellowed. but mostly moved to a very small town. i very rarely carry. anything. i mean i don’t carry anything. except a phone and a credit card. i even leave my dang keys in the car.

i’ll carry a g26 when i’m hiking or biking. cuz man, there are crazy people from the valley and homeless in the woods. the homeless for the most part they don’t bother anyone. except for the trash. that’s really bad.

i may carry when going to church. but for the most part… nope. other people got rhat covered. and i’ve had times of intervening with a mental health crisis or alcoholic lifestyle where i just didn’t want a gun on my person.


not saying it’s right, but it’s just been part of my life process.
B

bradsteen said:
My EDC pistol has always been a subcompact 380 - Ruger LCP, KelTec P3AT, etc. Hated them all, but I was accurate enough with them and figured they were small enough to always carry, which was the important part. Then I bought the Glock 42 and haven't looked back since. The +2 baseplates are a game-changer, makes it handle like a compact instead of a subcompact.

The rest has fluctuated a bit over time - knife has always been there, then added the flashlight, then the Kubaton. That's been pretty static for several years now. Used to carry the Surefire MicroStream, but a friend gave me a tiny rechargeable EDC flashlight last year, and that's been in my pocket ever since. Bright as hell, has momentary on/off, strobe, multiple brightness settings, etc. Even works as a lantern if you press the buttons enough times. Not familiar with the brand name, but it's held up great so far and rarely needs to be charged.

The biggest change to my EDC has been the trauma kit. I realized I was unprepared to deal with any kind of medical emergency, and that those are probably more likely to pop up than anything else. Wanted something to go in my back pocket, so had to be as thin as possible. Shopped around, closest thing I could find was the LTC Pocket atrauma kit, but it's too thick for me to back-pocket carry. So I improvised - bought one of those KelTec pocket gun rugs they ship with the P3AT, added a SWAT-T, quikclot, gloves, mini duct tape, alcohol wipes, and a mini sharpie (not pictured).

It'll do for now, but still needs to slim down further. Figure I'm not the only person who might want something like this, so having a company make a custom wallet/pouch for the purpose. In fact, I should get prototypes back from them next week - if it works as good as I think it will, I'll probably sell them online. Will post pics when I get it.

7 months and 4 prototypes later, finally got the trauma kit the way I want it. Slightly larger than the KelTec pouch, but works a lot better. Made from 1000D nylon, has an elastic strap to function as an armband for hands-free use, two big interior pouches, and straps to hold a sharpie, gloves, etc. Now is able to hold a SWAT-T, quikclot, steri-strips, antibiotic ointment, bandaids, alcohol wipes, gloves, and mini sharpie without anythingshaking or rattling around inside. Overall thickness is 1.25" with everything in it, but if I want to slim it down I can just do the SWAT-T, gloves, and sharpie - then it drops to slightly under 1". 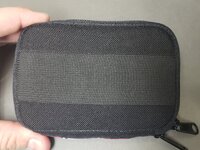 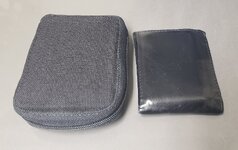 I've since added a flashlight and an IFAK with stop the bleed gear, and carry in a bag more than on my body as opposed to on my person

1775usmc said:
The biggest change for me personally other than holsters is carrying a fixed blade on a daily basis. In no way do I claim to be some “knife fighter” but the principle behind it and it’s effectiveness in tight/up close and personal altercations has me carrying one along with a folder that I use for daily tasks. I hope I never have to use it though. Along with my firearm.

The amount of time I spend driving and sitting in a vehicle, having a knife on my “weak side” could be very beneficial if a scenario took place inside the cab of my truck.

At least ONE knife at all times. Shoot I even have a flick-open folder in my jammie pocket, cuz ya never know... When fully dressed I often have 3 knives on me, and sometimes even four. 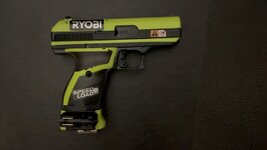 Pretty much my go to now. Got a great deal at home depot during their labor day sale.
Last Edited: Sep 24, 2022

In considering the OP's post title - it is Interesting to look back over the years. Looks like I'm a Smith and Glock guy.

About two years ago I also started carrying a Mark III size OC spray canister to have a less-than-lethal option on me.
B

Glizzy Goblin said:
View attachment 1281327
Pretty much my go to now. Got a great deal at home depot during their labor day sale.
Click to expand...

Aaaaaaaaaand now I want to get a HiPoint just so I can do this.

Glizzy Goblin said:
View attachment 1281327
Pretty much my go to now. Got a great deal at home depot during their labor day sale.
Click to expand...

How much firepower is enough for EDC?
2

Today at 10:32 AM
FireArm
C
Get your training in. Perfect example of good training, great marksmanship. Tacoma shooting
2 3

How often do you go out and fire live ammo?
2