"Unfortunately, the satellites deployed on Thursday were significantly impacted by a geomagnetic storm on Friday. These storms cause the atmosphere to warm and atmospheric density at our low deployment altitudes to increase.

In fact, onboard GPS suggests the escalation speed and severity of the storm caused atmospheric drag to increase up to 50 percent higher than during previous launches. The Starlink team commanded the satellites into a safe-mode where they would fly edge-on (like a sheet of paper) to minimize drag—to effectively "take cover from the storm"—and continued to work closely with the Space Force's 18th Space Control Squadron and LeoLabs to provide updates on the satellites based on ground radars.

Preliminary analysis show the increased drag at the low altitudes prevented the satellites from leaving safe-mode to begin orbit raising maneuvers, and

up to 40 of the satellites will reenter or already have reentered the Earth's atmosphere," the blog post said.
Click to expand...

ZeroHedge - On a long enough timeline, the survival rate for everyone drops to zero

Per friends in Northern Idaho and Northwest Montana who both use Starlink, no impact to them from this event.

They should change the name to StarSink!

@Certaindeaf I think 40K are planned, but the current count is much lower.

ATCclears said:
@Certaindeaf I think 40K are planned, but the current count is much lower.

Should have made them EMP proof.

Count is currently 2,000 satellites up. BTW Longwalkhome, they are not worried about EMP and this event was that the magnetic storm changed the atmosphere which became dense and would have used up too much fuel to get up to high earth orbit.

They believe that they are EMP proof. The plan is when they see a significant CME (Coronal Mass Ejection) solar storm heading in, they plan on powering the satellites down until it pass's by and expect that they'll all be fine.
Last Edited: Feb 9, 2022

Xaevian said:
They should change the name to StarSink!
Click to expand...

Longwalkhome said:
Should have made them EMP proof
Click to expand...

There's gotta be a joke in there, somewhere. Maybe @Xaevian ?

Are we gonna be able to buy Geomagnetic Storm Credits to save the planet?

I think I did that in my sleep last night....

Are we gonna be able to buy Geomagnetic Storm Credits to save the planet?
Click to expand...

Mono1 said:
There's gotta be a joke in there, somewhere. Maybe @Xaevian ?
Click to expand...

ZeroHedge - On a long enough timeline, the survival rate for everyone drops to zero

I wondered why my DVR rebooted half way through Play Misty For Me...

this may or may not be a good thing. 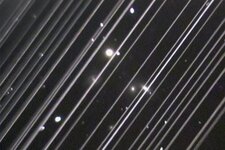