I guess Obama is going to regret spending $14 million on that oceanfront mansion. I'll start worrying about sea level rise when I see his property on the market at fire sale prices.

joshkk said:
"Because the land beneath Oregon has been rising faster than the ocean, there hasn’t been any major sea level rise off the state’s coast in recent history."

"However, sea levels are projected to rise 6 inches in the next 16 years due to faster rates of ice melt and increased thermal expansion."

Sea levels around Oregon are projected to rise as much as 6 inches in the next 16 years, mainly due to ice melt and thermal expansion. El Niño can worsen weather events and increase flooding, which is already a threat to communities. The state will need to work towards finding solutions to sea...

"Projected" Who's projecting? Long term projections have sold a lot of snake oil.
British economist John Kenneth Galbraith, when asked about the economy in the long run famously replied, "In the long run, we're all dead."
J

po18guy said:
"Projected" Who's projecting? Long term projections have sold a lot of snake oil.
British economist John Kenneth Galbraith, when asked about the economy in the long run famously replied, "In the long run, we're all dead."
Click to expand...

Sorry, I chose to omit the footnote citations from my quoted text. If you clicked through to the link, the specific answer to your question is "The US Army Corps of Engineers."

My advice to everybody: Reject Fear. Live Life.

This fear-mongering crap is never-ending. Covid. Rising seas. Cooling planet. Warming planet. Pollution. Overpopulation. Pick your poison, and there is someone out there trying to make you scared about it. Just reject their fear mongering and live your life.

Opinions aren't worth crap, but a little bit of data goes a long way toward understanding reality. The planet will indeed warm, and the simple reason is because it has nowhere to go but up. Average global temperatures are measured in geologic time, a time scale spanning millions of years. Will planet Earth warm in the future? Duh. We're at near historical LOW temperatures, so of course the planet will rebound to normal. Shown below is a chart from Smithsonian showing quite clearly how today's average global temperature (55.5 degrees Fahrenheit) is rather frigid compared to the past 400 million years when the average was 71.8°F. A person would have to be really stupid to think the planet will somehow magically remain at today's near record low temperature. The planet will warm as it returns to normal. Deal with it.

And guess what? There is not one thing humans can do about it. Ignore the barrage of "climate change" propaganda that says you can personally halt global warming. Anyone who truly believes that propaganda is just a pompous dufus, not to mention self-deceiving. Puny little humans do not control this planet's climate. Period. To think otherwise is the height of hubris. Whenever I hear people talking like that, spouting their "save the planet" propaganda, all I can think is how incredibly stupid and arrogant they are. 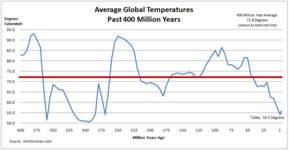 I like the water rise tool except it doesn't go high enough to wash the dookie of the sidewalks in downtown Portland.

Are there sincere attempts to understand our climate and the impact of coming changes by researchers following scientific principles without prejudice or preconception? Absolutely. Could Man's activities be having a significant detrimental affect? Possibly. Without establishing credibility I'm not buying it. I'm not closed minded, but I am by nature skeptical of any claim and the burden of proof is on the claimant, and IMO Climate Science as an entity has come up short.

That doesn't mean we should be free to trash the place nor does it mean we should not try to make it better. The reality is that we will ultimately have to be reactive to natural forces we can't control

I'm not too worried. I'll be dead before it's a problem for me.

arakboss said:
I have seen so many mask in parking lots and sidewalks.
Click to expand...

The parking lot at Market of Choice is the best place to toss all your old used masks, especially next to a Prius
B

po18guy said:
OK, so how to blame the Trump administration for altering the moon's orbit...
Click to expand...

Maybe his Space Force shouldn't have built that lunar base after all!

If a person carries a sign every day that says "the world is ending tomorrow", eventually they may be right.

Xaevian said:
If a person carries a sign every day that says "the world is ending tomorrow", eventually they may be right.
Click to expand...

But not for very long...

As the polar ice continues to increase, I predict the next "crisis" will be....
..... "Continental Sinkage" requiring dive masks and snorkels to be mandated.


(also, causing trillions of $ in "Continental lifting credits" to be sold to woke corporations to hide profits and political payoffs.)
Last Edited: Jan 28, 2022

Not a big fan of Zep covers but these gals get it!

^^^My friends have opened for Zeparella^^^

If anyone knows a serious guitar player that could play in a Zep cover band (does not need to be female), I have a lead on a gig for you.

arakboss said:
Has anybody noticed the sea level rise on the Oregon or Washington coastline?

Supposedly it is rising by 1.25 inches every decade or an 1/8th of an inch per year. Surely (and don't call me Shirley) somebody has been negatively impacted already? Highways permanently flooded? Great Whites taking up residence in your living room? Are you having to tie your boat off on the chimney? Last year when I visited the coastline it looked the same as it did 40 years ago.
Click to expand...

How do I sign up to get a shark when the beachfront owners want to rehome them?

User 1234 said:
How do I sign up to get a shark when the beachfront owners want to rehome them?
Click to expand...

Just get yourself a Land Shark instead.

At the rate of societal decline we are experiencing, these global concerns are insignificant in my mind.

I think I'm in love with their lead guitarist... < swoon >

The drummer reminds me of animal on the muppets. Not her look but her drumming style, she is active.