The other day I stopped into Pinto's to introduce my friend Kevin to the wonder and glory of that particular shop. Naturally I had to have a look in the case and spotted a near-pristine Colt Junior .25 auto for $300- a pretty good price for one in that condition. I would have seriously thought about it if I hadn't noticed nearby a Colt Detective Special with a hammer-shroud in .32 Colt New Police (.32 S&W Long.) Odd enough to see this, but the price floored me- also $300! According to the tag it had a 'timing issue.' I looked anyway, and was a bit baffled at first, but then I was told to manually cock it very slowly. When I did the cylinder failed to lock by about 1/32". Double action and normal thumb-cocking could not reproduce this effect.

The gun is in excellent condition, showing only mild holster-wear to what I believe is the original finish; the stamped pony on the sideplate has slightly raised edges which would not be present on a refinished gun. The double action trigger is worthy of awe, and the factory-installed Colt hammer-shroud could perhaps be sold for more than the price of the gun! I asked them to set it aside while I consulted Linda. Cash is tight, but I thought we could at least put it on layaway. Linda approved this plan, but for some time she has been hinting that I should perhaps consider disposing of the guns I wasn't much interested in, and there were a couple of suitable candidates. A bit of horse-trading later and we walked out with the Colt and Linda- lord she has a good eye- put the Colt Junior on layaway! At the end of things we weren't out-of pocket so much as a dollar.

On arriving home I checked the serial number- the gun was produced in 1949. I may actually have this gun lettered by Colt- it's that good. Plus the factory-installed hammer-shroud may actually be worth more than I paid for the gun. This is one gun that I am absolutely not going to molest! OK, I might add a T-grip, but that's 100% reversible so it doesn't really count.

The tiny amount I need to stretch the hand to bring it into time should be no problem, but I am in no hurry; the problem does not happen in normal operation; you pretty much have to provoke it deliberately. I'm going to head out to the shop and load some ammo- I can hardly wait to get this thing to the range! 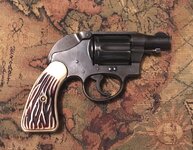 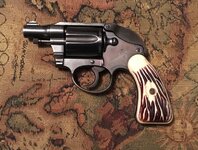 Nice find. The universe has smiled upon you.

Oh, man. I so dig those classic wheelguns. 'gratz!

I'm sure that is the first Factory hammer shroud I have ever seen! Good catch! DR

Took it shooting today- this was five shots at seven yards, about one shot per second- 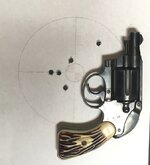 That'll get the job done.
C

Tinker Pearce said:
Took it shooting today- this was five shots at seven yards, about one shot per second-
View attachment 393138

This was at the same distance as fast as I could pull the trigger-
View attachment 393139
Click to expand...


Instant son-of-a-bitc#, (just add bad guy). This is what I mean by "the .32 pistols and revolvers are underrated".
Take my word for it, they can put them where they're needed... very quickly!

Captain O said:
Instant son-of-a-bitc#, (just add bad guy). This is what I mean by "the .32 pistols and revolvers are underrated".
Take my word for it, they can put them where they're needed... very quickly!
Click to expand...


Not to mention that the cartridge has potential that commercial ammo doesn't even scratch the surface of.

The .32 Smith & Wesson Long (Colt New Police) has long been known as a very accurate round and was used often in target shooting back in the day

You can still buy factory wadcutters.

Typically that caliber is not as much in demand as 38 Special by today's shooters seeking a defensive revolver primarily due to the gun press.

As you say it has greater potential when handloaded

I'm a sucker for vintage Colt's and would have snatched that revolver up in a heart beat at that price.
C

Tinker Pearce said:
Not to mention that the cartridge has potential that commercial ammo doesn't even scratch the surface of.
Click to expand... 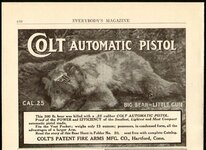 Nice little COLT and for the price, you can't loose........
Been to Pinto's Gun Shop a lot, nice people and very fair pricing...


The bear must have choked on it while chewing the leg off of the person who had been carrying it.

Lilhigbee said:
The bear must have choked on it while chewing the leg off of the person who had been carrying it.
Click to expand...

Indeed. I informed PETA that someone sock puppeted a poor creature so don't worry.
W