I recently traveled to the dry side of Oregon to purchase a Darr barreled Rolling Block, and while there I ended up buying a number of other things. Among the things there were some "parts guns" that were Ballard rifles. A couple looked pretty complete, as they were barreled actions. Along with the barreled actions were a lot of associated parts, and appeared there might be enough to put together one or two rifles.
When I got home I was infatuated with the Rolling Block, so didn't spend any time with the other stuff. But today I got time to look things over, and realized that a lot of the parts were matching serial numbers, and when I set them aside it turned out to be a complete Ballard #2 Hunter in .32 Long! The other barreled action was complete minus stocks, and it was a #3 Ballard Gallery model in .22 Long. I dug through my parts and found a forearm that was for a #3, and found a really nice buttstock that was for a straight grip receiver, but cut in pistol grip style. The lever was wrong for this buttstock, and was hitting the wood, but I had a spare custom bent lever, and it fit the pistol grip shape perfectly!
I tossed together the parts for the two rifles, and ended up with two complete, and pretty nifty old 1870's Marlin Ballard rifles! My son in law wanted the #2 in .32 Long, so he's taking it. The custom stocked #3 in .22RF will likely go to the next gun show and get sold. I've got four #3 Ballard rifles, so don't need to keep it; although it is tempting me to keep it also. 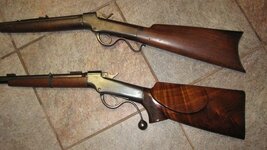 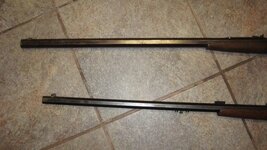 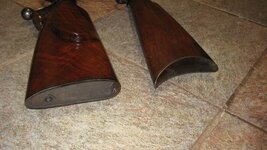 You never see ANY Ballard rifles over here...

New slings on my BP-era rifles - with one still to come...