Nosferatu said:
gank the cat off their hooptie
Click to expand...

WTF does that even mean? Can we have it in English?

nwslopoke said:
Depends on the state. The McCluskys had a rough go and they are lawyers.
Click to expand...

Additionally, it's one thing to beat the charges.
After that you're open to civil suits.
A la OJ

Cause you know the family will come out of the woodwork and claim "he's a good father!" "Just turning his life around!"

oremike said:
I'd be tempted to sneak out the back with a scoped rifle to have a bit more stand off and request that they surrender.
Click to expand...

After a slap on the hands, they would just be back the next day.

Thanks for sharing that. Appreciate hearing the thoughts of a WA attorney who specializes in gun law.

gmerkt said:
From a practical point of view and perhaps also a legal one, the pointed gun wasn't going to be fired so long as the door stayed closed.
Click to expand...

I don't know that.

My point is/was, when someone points a gun at you, you can't assume their intentions. When it is a criminal, you have to pretty much assume that they mean to harm you - you can't wait to see what they are going to do or assume anything. I.E., you can't wait for them to shoot before you know they are going to shoot you. They may see a curtain flutter due to the furnace coming on and blowing hot air out a vent below the curtain.

In this case, if I could do so safely (know the area behind the criminal is safe) I would shoot first and ask questions later.

The chief of Police in my hometown said to always drag them into the house and put a butcher knife in his hand.

skywag said:
The chief of Police in my hometown said to always drag them into the house and put a butcher knife in his hand.
Click to expand...

Yea but you don’t watch enough CSI episodes to cover your tracks correctly.

I don’t care who you are, if I see you standing in front of my house with a loaded gun through my camera system I won’t even announce myself the next person you’ll see is your “god” or the Devil depending on how your life was lived… someone needs to make an example out of these “thugs” this is getting crazy.

skywag said:
The chief of Police in my hometown said to always drag them into the house and put a butcher knife in his hand.
Click to expand...

Doesn’t your car have a trunk ?

Personally I see this as homeowner has a cam so knows perps attention is focused on the door. That can be used to gain a big advantage. Don't do anything around the door. Get a rifle or shotgun etc trained on him from above and behind such as a second story window (or other position of advantage) and give orders. If he then points a gun at you there is reasonable fear that your life was at risk, and that is after you attempted to stop the perp peacefully. If he puts the gun down as ordered then that would be the best of course and detain until cops get there.

I mentioned in another thread we had a guy looking in all basement windows (unarmed as far as I know) and I watched him on cams then confronted him from above when he was cornered. I had shotgun with #00 buck in hand that I did not show him. I know the pattern at that range and he would not survive if he had pulled a gun. Reminds me of this Clint Smith video (although my situation was more than 3 yards):

A couple articles relating to self defense in Oregon FYI.

This one is helpful imo because it discusses proportional use of force and imminent threat among other things:

This one is helpful mainly due to listing of some of the relevant laws:

What you need to know about self-defense in Oregon-- including defense of property, physical force, and deadly force with a firearm.

asiparks said:
Doesn’t your car have a trunk ?

I have 16+ acres isolated on a mountain, a shovel & pickaxe, two 4x4 trucks and a neighborhood where residents engage in target practice from time to time, so gunshots are not something that they worry about.

The Heretic said:
I would shoot first and ask questions later.
Click to expand...

Your attention is invited to the video clip in post number 64, if you haven't watched it already.

The guy in the vid clarifies it pretty well for all of us non-attorneys. In terms of what the law permits us to to do. BUT: He makes the point that there is what we are permitted to do, and what we should actually do. And they are not always the same thing. The guy also uses the phrase unintended consequences, often enough a main feature of emergent situations.

I've been going over in my mind how I would react to a converter thief. In the unlikely event that I would happen to catch one in the act at 0300. If I didn't see a weapon, I would probably go out, yell at them and try to run them off. If I saw any hint of a weapon, I wouldn't go out. If a weapon came out after I tried to run them off, I'd go back inside, and stand by with my gun until they are gone. I'm probably not up for a gun fight at night over a cat converter. After all, they are stealing property, not trying to enter my home. I'm not going to take any measures to detain them. There is hassle involved at every level of this. They come here, they're probably going to get a converter.

People just naturally don't like to get taken advantage of, like getting ripped off. Emotions can run high on this at the instant. But at my point in life, I'm playing longer ball. Do what you want to do, just know that there may be consequences of it.

One more thing, the idea of killing cat converter thieves, digging holes on your property to hide bodies, etc., this is just foolish talk. Especially since you've posted about it in a public place; prosecutors will go back over everything you've ever said in a homicide case. Potential consequencies of that don't even need mentioning.
Last Edited: Jan 24, 2022

JohnnyMac said:
For clarification, that 30 round mag dump I spoke of was into their unoccupied getaway car so to render it inoperable and forcing them to depart on foot, thereby being forced to carry my catalytic converter with them. I just wanted to make it as difficult as possible on them.
Click to expand...

I fully sympathize with the temptation. But the consequences. Maybe there is someone in the car that you are unaware of. And you can't know where all of those bullets or fragments are going to go in your neighborhood. It may also draw fire from the crooks who brought guns but weren't going to use them unless they encountered armed resistance. Probably a bad scene all the way around.

I say again, I can't believe crime around here has come to this; petty crooks who arm themselves to steal car parts. In days gone by, most burglars made a point of never carrying a weapon. Because just getting caught for stealing was a fairly minor rap. Carrying a gun in the commission of a property crime was a serious sentence escalator that they wanted to avoid. I guess is is no longer so.

Oh dear. It's not 1970 anymore. An awful lot has changed since then, not much for the better.

The perpetrator's use of deadly force (producing, displaying, aiming, discharging) in a theft elevates it to armed robbery. Does not matter if it is cash, bubblegum or catalytic converters. They are demanding to take the asphalt temperature challenge.

Re what crime has come to, I see posts like this on nextdoor daily, "now I have to spend $2000 for a cat". Plus a lot of times they steal the entire car and strip it down somewhere else. They don't even bother to hide it anymore and will do it right in the homeless camps even on busy streets sometimes. 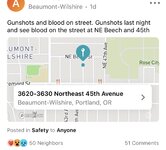 I'm pretty sure I know how this guy would handle it......

Legal Self Defense with Illegal Gun?
2 3 4