Car Recycling - but what if it is a Tesla ? 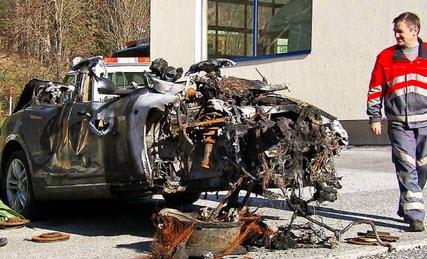 Has the "green" team over at Tesla thought about the entire lifecycle of the car? Where will Teslas (and their batteries) go to die?

ICON, a restomod company based in Los Angeles, and Stealth EV, a company specializing in electric car conversions, unveiled a new EV conversion at SEMA today: a 1949 Mercury coupe with a Tesla battery pack. They say that the 1949 Mercury EV Derelict was commissioned by a longtime client, who...

They turn '49 Mercurys and Shelby Cobras into EVs, one Tesla carcass at a time

A growing army of hot rodders is cannibalizing crashed electric cars and turning them into custom vehicles with electric power trains.

The 49 Merc is cool as sh*t... might be cooler w a flathead or a 1G Hemi, but technology marches on and electric motors can provide ungodly acceleration like, RIGHT NOW... it's immediate and brutal but lacks the visceral feel and sounds of a flathead or even a pushrod 60° V8.

I was expecting to read a tale of Tesla stonewalling... they don't like unauthorized people using their technology for unauthorized purposes and I would've thought that a 49 Merc coupe would fall into that catagory.

I heard an interview w a guy who attempted (successfully, no thanks to Tesla) to retrofit a newer motor, computer, etc into a totalled (flood damage, I think) older model Tesla. He was rebuffed by Tesla for even a usable key.

It reminds me of the dozens of one-off and prototype show cars destroyed by the manufacturers in the 50s and 60s because the high muckity-mucks didn't ever want them to be seen on the road rusty, dirty, and decrepit as almost all used cars tend to end up.

Also, GM's EV1 program... they would only lease these vehicles and require their return at the end of the term. They knew that the disposal of them would be a problem in the future... they were right.

Reason: High labor and material cost of handling hazmat. Anybody who has ever had a contractor tell them the texture in their drywall or kitchen floor material contained asbestos will back me up on that.

Scrap mercury, dealers used to pay good money for scrap mercury from gauges, etc. Now, you have to pay a hazmat company to take it off your hands.

I was waiting to put a hydrogen fuel cell power plant in my old '66 Ford Fairlane but got tired of waiting for parts. I was going to put a 1980-something AOD transmission in a '72 Ford sedan but decided it was easier to get a newer Ford Crown Victoria that was built with an AOD as standard equipment. That turned out to be a wise decision.

Batteries are what they are for a very specific reason.

No one is about to drop a battery that can change the entire fuel or $ system the globe runs off.

Look into battery sciences, you’ll learn of none. You will not know of any invention or recent account of new tech. Most scientists are working for a fuel company or dead, dying mysteriously of coarse.

Point being, the industry puts up with Tesla because the CEO is good with his money and endorsements. Tesla likely shares its advance tech with the .gov so they will get to have their feel good projects that bring in feel good vibes for younger investors. Since after all, Tesla doesn’t really bring in any sort of profit.
You must log in or register to reply here.
Share:
Facebook Twitter Reddit Pinterest Email Link