Black powder and watches - a fine pot pourri of interests......

You could be confungled to see what appears to be an old wristwatch on any gun forum, and worser yet, on part of a gun-related forum that talks about muzzleloading firearms. Well, folks, stick around and you may well leave better-informed than when you arrove.

Well, if you've stuck with me thus far, you deserve to be told the story of how I acquired this lovely old timepiece you see below, a treasured possession that has been in my care since late 1987. 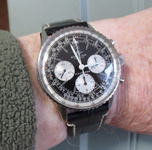 We were shooting over at Barton Road ranges, just outside the university city of Cambridge. They are long ranges [1200 yards] belonging jointly to the Army and Cambridge University OCT, on one fine spring morning of that year. We were hosting a bunch of fellow BP shooters from a sister branch of the Vintage Arms Association - AKA the VAA. This is a group of likeminded shooters who are firmly of the opinion that little or less was added to the lexicon of firearms inventiveness after 1933. I'm not certain how this rather odd date was settled on, but it is no real concern of mine, as none of my collection at that time included anything that hadn't either been designed, or made, before that date. In case you're wondering, replicas of pre-1933 guns were allowed.

I was shooting a .577 Enfield three-band rifle, more in hope than in expectation, at a target a scant 600 yards away, with great lack of success thus far, when I was snuck up on by one of the guests [after I'd taken note of yet another carefully documented 'miss'].

The conversation went like this - more or less - 'Sorry to trouble you, ol' bean, but Roger over there [the RCO at our end of the shooting line of about forty or so] advises me that you are shooting a .577cal Minié bullet.'

I admitted that that was nothing less than the solemn truth.

'In that case, since you are slinging them down-range at a rate that is sufficiently impressive to persuade me that you have more than you need, can you spare a few for a fellow-shooter who has travelled over a hundred miles to shoot today, but had, in the crazy rush to get out, forgotten his '$$£&fv' bullets?'

In a manic fit of generosity, much taken by his plight [who has NOT done something like it at some time, like a bolt, or the wrong bolt?], I told him to help himself to my bulging bag o'bullets. He must have taken about fifty or sixty before my generosity got replaced by an anguished look, but he did stop in the end.

Some time later, at the close of play, and after the few trophies had changed hands - an annual event, but not one in which I participated, again, an annual event - he returned.

'As you may know, I came third in the comp', he said, 'shooting those bullets you made, so is there any chance of you making any more for me for next time we come over?'

It seems that he BOUGHT his Minié bullets from a supplier 'oop North, rather than make them as most of us do, by melting down lead and pouring it into a mould.

Of course I can, I heard myself saying - I'll bring them over next month. 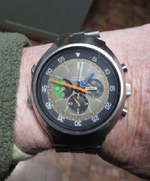 I agreed to the deal, after all, making bullets is no real hardship, as anybody who does it can readily testify, and is both rewarding and therapeutic in the extreme. Besides, I'd heard of the watch of which he spoge and was keen to find out what it might actually be.

The month passed and we met again, and he arrived and came straight over to me. 'Here y'are', he said, 'here's the Britlong I told you about,' - handing over a small but well-filled clear plastic bag.

Completely dismantled by his deft but daft young son, it had languished in a sideboard for a few years while he debated what to do with it, having been advised that putting it back together might well have involved a donation of around a thousand English pounds to the watchmaking/repair specialists.

Nevertheless, I thanked him for his generosity and went home later, covertly afume at what I saw initially as a bad deal, until I remembered the little advertisement on the notice board in our officers' mess, offering clock and watch repairs carried out by a self-proclaimed 'skilled horologist and instrument technician' who worked in one of our on-base squadrons. To cut a long story short, he was so keen to have a Breitling to play with that he waived all charges, excepting that whatever he had to pay out for parts, I would pay double. As it turned out, the hour hand was missing, but friends, even in 1987 that cost around $50. So, for a total of $100, I had a timepiece that would grace my wrist almost daily until it was serviced back in 2010, and until three weeks ago, when the mainspring busted, to use a technical term.

I got it back today, it having cost me £695 to repair and service. As of today, that is $847.90. That price, I might add, was what we call over here 'mate's rates' - a sum devoid of tiresome details like sundry taxes and unnecessary extra levies imposed on the downtrodden citizenship of this nation by a careless and tyrannical government - some you've all heard of before, I'm sure.

Was it REALLY worth it?

Well, yes. As I left the fixer-upper's dealership, he looked at me wistishly, 'I've just looked up the history of your watch in the Breitling records', spoge he - 'such-and-such serial number, triple white chrono dials, AND the rare 'double-airplane' logo and an original 806 Venus movement - it ought to be insured for around £6000 or so....'

Thanks for the share. While my black powder or vintage arms interest is confined to muzzleloader seasons, I do love watches, especially classic ones. Your generosity was clearly rewarded and is a welcome departure from the usual, no good deed goes unpunished…Beautiful watch.

Great story, @tac.
I had a Chinese copy of your watch face, sans Breitling logos, that I picked up in Shanghai. The band broke into a dozen pieces less than two weeks later, with multiple screws coming loose and whatnot. The bezel must have been made of acrylic because it was susceptible to deep scratches by the slightest objects. Junk - not even worth the $20 I paid for it.

P7M13 said:
Great story, @tac.
I had a Chinese copy of your watch face, sans Breitling logos, that I picked up in Shanghai. The band broke into a dozen pieces less than two weeks later, with multiple screws coming loose and whatnot. The bezel must have been made of acrylic because it was susceptible to deep scratches by the slightest objects. Junk - not even worth the $20 I paid for it.
Click to expand...

Ah, you mean a Bleitring?

A fine timepiece, and great story of how it was got!
My own, My Precious! 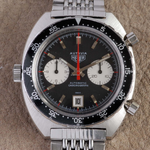 I do wear my Grandfather's Bulova from time to time.
He wore it all through the Pacific during the War....it still keeps good time.
I don't have the original band...but being leather ...and the Pacific...

I still sport an Accutron out of the collection now and then. Nice looking timepieces in the posts above. 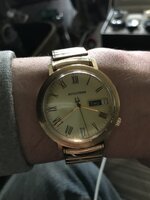 Such beautiful pieces of machinery.
But, as nice as they are, I'm afraid after having at least 3 watches snatched off of my wrist, by various pieces of equipment, not counting a melted wedding ring,

I'll have to stick to plastic Casio's.

Where to buy black powder?
2 3