Biden: If You Don’t Support Banning Assault Weapons, ‘You’re Not On The Side Of Police’ 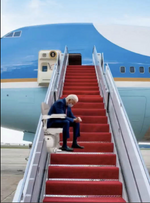 The FBI has installed this "assist" for the aging leader.

DunRanull said:
The man is a mere shell of what he once was. I liked him even less then- now my "compassion" thingie has kicked in to a degree. Still, knowingly or not, he is wrecking my country and that is hard to forgive.
Click to expand...

He has always been an SOB from what I can tell. Just watch the old Clarence Thomas hearings some time (where he miraculously doesn't have the stutter he claims to have). He's just a nasty, not so bright, corrupt jerk who hasn't really accomplished anything in his life other than padding his bank account with payoffs.

Maybe at some point I'll tell you all how I really feel about Brandon.

Once again the progressive(?) left controls the dialog. Notice that police nationwide are not in danger from violent felons - but from the AR15s owned by "clear and present danger to democracy" MAGA republicans. Someone please tell Brandon that we do not live in a democracy.

Beam me up, Scotty.

It's much better watching that if you hum "Hail to the Chief" at the same time. Then break into a sort of choppy circus music for the finale. Try it. I think you'll like it.

RVTECH said:
This reminds me of a lib/earth muffin statement of the '70s :

animals are delicious and so are "assault weapons".
D

IF YOU DON'T SUPPORT BANNING JOE BIDEN, YOU'RE NOT ON THE SIDE OF THE UNITED STATES CONSTITUTION!

If you can't read and understand the Constitution of the US then,
YOU shouldn't dare to run for political office.

ma96782 said:
If you can't read and understand the Constitution of the US then,
YOU shouldn't dare to run for political office.

dancinghippos said:
50 years ago maybe but people running the education system trashed it so badly that high schoolers don’t know the basics that I learned from my 5th grade teacher
Click to expand...

All the more reason to keep them out of public office. 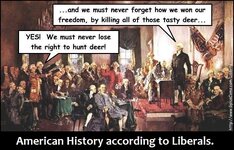 Yarome said:
Different topic, but have to ask... why does it always piss me off a little whenever I see Brandon throwing a salute??

Probably because he is quoted referring to American servicemen as “dumb bastards.”
C

American123 said:
Probably because he is quoted referring to American servicemen as “dumb bastards.”
Click to expand...

He said that and tons more. Ugh.

So did KISSINGER and others using their own nasty and demeaning words to people who served.

Especially during the Nam era.

Look at how many of those D and R creeps and con artists NEVER SERVED THEIR COUNTRY and most of them had 5 or more deferments!

I can't see how Bye - BUY BIDEN ala Hunter and others (D and R!) are still not held accountable for supporting the most corrupt, disgusting and biggest MONEY LAUNDERING country on this earth!

KICK back time! A bunch of GRIFTERS.

Just like Jarvanka are (Two of them!) especially with ALL of the Saudi money! Crikey! BEFORE, during and after their WH time.

I would LOVE TO SEE even more of those financial statements, bank, investment, retirement, TAX, etc. records (Online accounts already published in the REAL news.) and the HIDDEN ones with MONEY held in other countries. Follow the money, follow the money some more and CONNECT THE DOTS!

IT is amazing on what is still NOT SHOWN to the public eye - in the lying mass media when it comes to all of their actual FINANCES, LAPTOPS, old computers not just Hunter's, Huma's and Hill's, Huma's pervert ex husband, the .gov STUFF that HUMA had on the computer plus her making COPIES AT HOME regarding classified information - she admitted this for her WORK AT HOME testimony, the 2 brothers that worked on some of those computers, the Epstein and his PIMP criminal, spy, blackmailer, abuser Maxwell cookie crumb TRAIL with ALL of their clients, and tons more including TAX RECORDS that were and were NOT shown to the public yet!

I think old HUMA may have her own files kept aside for SAFE KEEPING. You never know!

FourTeeFive said:
He has always been an SOB from what I can tell. Just watch the old Clarence Thomas hearings some time (where he miraculously doesn't have the stutter he claims to have). He's just a nasty, not so bright, corrupt jerk who hasn't really accomplished anything in his life other than padding his bank account with payoffs.

Maybe at some point I'll tell you all how I really feel about Brandon.
Click to expand...

Plus he and his wife LIED about their relationship and more.

Re: The time that they met, the car accident - Jill's EX has all of the records on that CAR ACCIDENT incident, the time she was involved in his campaign, and lots more. I saw that in print.

JILL found her sugar daddy in her creepy touching/feely ON THE TAKE and crazy/senile con artist husband.

Plus she should be ASHAMED of herself in letting her 'husband' continue to be in the WH even if old Obama and his ilk = old crew is still running IT ALL with a few other globalists and commies BEHIND THE SCENES!

When OLD JOE bent down and touched the one little girl on her breasts - squeezed her nipples and more right there in PUBLIC - he should have been CONFRONTED by the Dad/Mom and HAULED OFF to JAIL too.

NO one is their right mind and in the KNOW wants OLD JOE by their children and that IS KNOWN in the District of Criminals!

Even HIS WIFE, Jill, said that she FOUND HIS FORWARD ACTIONS and touchiness disturbing when they first met and that WAS ON the regular news! Then she just laughed about it and said that she got USED TO IT.

Yarome said:
Different topic, but have to ask... why does it always piss me off a little whenever I see Brandon throwing a salute??

National YT put on notice for 2A censorship by Montana AG!
2