With the release of the new Bergara B-14 R I thought I would be good to get a thread started about it. It looks like an incredible rifle that is perfect for precision 22lr competitions like NRL22 and others. I have been shooting PRS for several years and have been wanting a good 22lr to use as a trainer, but I couldn’t find anything similar to a Remington 700 style rifle. The new Bergara is built around a Remington 700 footprint which allows this action to be dropped into any chassis or stock that accepts Remington 700s or Remington 700 clones, like my Bighorn action on my PRS rifle. It also uses a AICS sized magazine so it perfectly mimics a full sized match rifle. This is exactly what I have been looking for, but unfortunately it is in high demand and sold out everywhere. They are sending out more rifles to distributors so hopefully I’ll get my hands on one soon. I realize the Vudoo V-22 would be perfect as well, but there is no way I will ever have enough money to buy one of those. If anyone has gotten their hands on one yet, please share your experience with the rifle and post up some accuracy tests. Also, If anyone finds one in stock somewhere, please share. These will be hard to find for a while still. 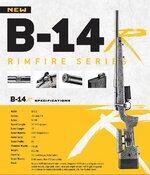 I purchased mine from Gunbroker a few days ago, but with the holidays, I probably won't see it for a while still. Also ordered a 30moa Seekins Precision scope base to put on it once it gets here.

Finally got my rifle this past week. I threw some Harris bipods and my Athlon Midas Tac 6-24x50 on it since it focuses from 10 yards to infinity and started plinking around with some cheap CCI Blazer ammo. So far I really really like this rifle.

This is the first 22 I’ve had with a match chamber. Due to lack of experience with match chambers I didn’t realize that the bolt actually pushes the round into the rifling. Since this is supposed to be better for accuracy I’m ok with it, but it does make the bolt closure feel pretty heavy since you are forcing the round into the barrel as it closes, which can cause you to accidentally shift the rifle when shooting off positional barricades where you aren’t as stable.

A lot of people have been asking about controlled round feeding on the 22s so I decided to check it out for myself. As the case leaves the fee lips of the mag, it pops up into the bolt face and is then directed into the chamber. However, as the round enters the chamber, it makes contact with the top of the chamber, so it still has the potential to be slightly deformed before going into the rifling. I may try to add a video if I can figure it out. (It’s slow-mo, so it’s pretty long)
View attachment E93DE34C-10CF-40F7-830D-36EF6B48D1DE.MOV

I originally planned on replacing the trigger right away, but after using the factory trigger during break in, I’ve decided to just leave it alone for now. Bergara claims the lightest weight the trigger can be set to is right around 2.5lbs, which is what mine was set at out of the box, so I never bothered to adjust anything. I would prefer a trigger weight around 14-16 ounces like my TriggerTech Diamonds in my match rifles, but since this trigger breaks very cleanly and doesn’t have any creep, it feels pretty dang good even though it’s 2.5 times heavier than my other triggers. I may switch it out further down the road, but it really is a pretty dang good trigger.

Another thing I planned on doing right away was to replace the stock with a KRG Bravo or an MDT ACC chassis to match my two PRS rifles. Unfortunately the ACC chassis are really expensive so I can’t afford to buy another one. After using the HMR stock on the bergara I’ve decided to stick with it for the time being. It is a really nice stock and has plenty of adjustability for me. I also like that it is heavier than the KRG Bravo which is nice for training purposes since my ACC is pretty heavy. The vertical grip is comfortable and has a perfect shelf for thumb placement by the tang. Unfortunately, there isn’t very much room between the bipods and the magwell for a bag. The bipods and mag tend to interfere with the bag (game changer, tactical udder, etc.) when shooting off barricades. I may end up adding an Area 419 Arca rail or something similar to the forend to get more room for a bag and to allow me to use my Ckye pod and my Warne Skyline bipod, both of which attach to Arca rails.

The one gripe I have with this stock (and most other stocks/chassis for that matter) is that the cheek piece is very hard and gets uncomfortable after a lot of shooting. Since I am a Cheapskate, I used the little laser attachment for my 3D printer and designed a pad that fits the HMR’s cheek piece and added a logo to it while I was at it. It is surprising how big of a difference a little foam makes. It makes the rifle feel much nicer and it’s more comfortable when doing high volume shooting.

Lastly, I did notice that the safety lever is really stiff when you try to put it on “safe” with the bolt closed. It actually kind of hurts your thumb. And yet, it switches to “fire” very smoothly and easily. I think the lever may be interfering with something when the bolt is closed, because if you operate the safety lever with the bolt open, it moves smoothly and easily in both directions. This may just be an issue with my specific rifle. It would be interesting to know if this is an issue for other people too.

Sorry I don’t have any pictures of groups at 50 and 100 yards right now. I’m still waiting on some higher end ammo to show up this coming week. I did, however try a few types of ammo that were available off the shelf at my local sporting goods store. So far, I have tried CCI Blazer, CCI Standard Velocity, Norma Match, Norma Subsonic, and RWS Target Rifle. Surprisingly, they seems to all shoot very very similar. If I had to choose, I would say the super cheap CCI Blazer and the RWS Target Rifle seem to be slightly better than the others. I plan on testing some SK, Lapua, and Eley ammo soon as well to see what the higher end ammo can do.

I apologize if this post is way too long, but I figured some of you may appreciate it. When I was looking for reviews earlier on I couldn’t find any in-depth reviews, so I just had to find out for my self. I will try to post up some accuracy tests soon too, since that is was people tend to want to see most.

I’ll include some pictures of my rifle with and without the cheek piece. I may do some videos soon too. 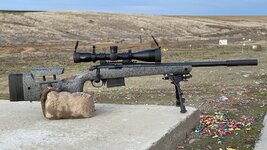 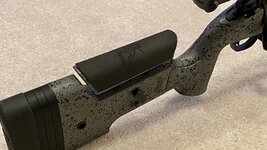 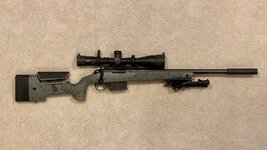 
Probably the first .22lr I can get excited about.

Kruel J said:
Probably the first .22lr I can get excited about.
Click to expand...

Be interesting to see how it stacked up against the CZ.
CZ-USA CZ455 Varmint Precision Trainer Bolt .22 LR 20.5

Here’s a better video. The reason the round grazes the top of the chamber is because the round in the mag beneath it is pushing it upwards. It doesn’t smash into the edge or anything like that, but it does rub. I’ve noticed the edge of the chamber shaves of a tiny bit of some of the rounds but not all. It is very very minimal, but I did notice tiny shavings once in a while. I don’t think you can see any shavings in the video. Here’s the video:
View attachment trim.2F82239C-57E3-485E-8DEE-B1C55DDF9C08.MOV

What the heck happened at the 1:04 part of that video? Looks like some ghost threw the cartridge back in!

I like it a lot, having a thing about bolt-action rifles since I was about five or six.

However, the $1590.22 stands between us and great friendhoodness.

Reno said:
What the heck happened at the 1:04 part of that video? Looks like some ghost threw the cartridge back in!
Click to expand...

Haha yeah sorry about that. The gun was laying on its side for the video so i could get better lighting on the chamber. The round just rolled back in off the side.

Some people have asked about if the bolt can be removed without removing the cheek piece so I made a video to show how it works. You can take it out without moving the cheek piece, but it does hit it slightly. You have to wiggle it free. Here’s the video:
View attachment 82D837E6-4105-47D5-BA05-49A73792D9B7.MOV

Can't wait to get mine. Just ordered a carbon fiber barreled action to go in a stealth gray KRG Bravo stock with a Timney 2-stage trigger.

Have one on the way myself thanks for the review. Have read some positive reviews on rimfire central and snipershide so have high hopes for this rifle.

grapo13 said:
Have one on the way myself thanks for the review. Have read some positive reviews on rimfire central and snipershide so have high hopes for this rifle.
Click to expand...

Just don’t take the first 500 rounds as how it’s going to shoot and remember the Bentz chamber likes match ammo.

Well as a newer shooter I think it will probably out shoot me for a while at least, but I will keep that in mind . And from my research this b14r has a match chamber, its the semi auto bergara bxr which has a bentz chamber.

grapo13 said:
Well as a newer shooter I think it will probably out shoot me for a while at least, but I will keep that in mind . And from my research this b14r has a match chamber, its the semi auto bergara bxr which has a bentz chamber.
Click to expand...

Eh, match, Bentz, what’s a few thousandths of an inch... Any Bergara B-14 Timber Users