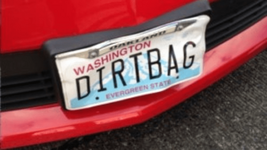 BELLEVUE, Wash. -- A fender-bender at a Factoria car wash over the weekend escalated and escalated.

After punches were thrown, threats to kill police were made and a stun gun was used, a 40-year-old man was under arrest. His car, a red Chevrolet Camaro, was impounded. Its custom license plate reads "Dirtbag," Bellevue police say.

It all began just around 3 p.m. Sunday at the Brown Bear in Factoria. There had been a minor rear-end crash as drivers were in line waiting for a car wash.

One driver got out to take photos of the damage. The other driver reportedly got out of his car, pointed a pistol at the other driver and threatened him, police said.

When police arrived, the 40-year-old Bellevue man wouldn't get out of his car or follow police instructions, police said.

Officers tried to remove him, and he fought back. He punched one officer in the face. He threatened to kill the police and made disparaging comments about the victim's perceived ethnicity, police said.

Police used a stun gun on him and arrested him.

The officer who was punched had a minor injury but was taken to a hospital as a precaution.

Well , looks like "Truth in advertising" , in this case what with "Dirtbag " on the license plate..
Andy

It would be handy if the morons would wear a name-tag. In this case the accused did just that. Yeesh ... you can't make this stuff up.

AndyinEverson said:
Well , looks like "Truth in advertising" , in this case what with "Dirtbag " on the license plate..
Andy
Click to expand...

Part of an Oakland Raiders plate frame still hanging on to a crinkled license plate that reads "DIRTBAG".....

Anyone else see the irony here?

AndyinEverson said:
Well , looks like "Truth in advertising" , in this case what with "Dirtbag " on the license plate..
Andy
Click to expand...

Curious if the perp was sporting a mullet?

Deserved what he got 1000x over. Deport him back to California!!!
Douchenozzle.

If he really had a gun I would hope they make him where he can never have one again. Assuming this all happened as told he is the last person who needs to be running around armed.

Lucky for him that he hit cop, an armed civilian would have just slotted him.

How in the hell do you hit someone sitting in line for a car wash to begin with? My guess is his wife is wearing a I'm with stupid shirt!

I'm surprised he's not taking one right now after brandishing in Bellevue.

SKrueger said:
How in the hell do you hit someone sitting in line for a car wash to begin with? My guess is his wife is wearing a I'm with stupid shirt!
Click to expand...

Edit: I have been waiting for a moment like this to use that emoji!

Edit: I have been waiting for a moment like this to use that emoji!
Click to expand...

Did the driver of the red Camaro have a CPL? He will lose it for all times for punching a police officer. I know that without a CPL you cannot carry a loaded gun in your car, it must unload put in your trunk.
Share This Discussion
Link Email Facebook Twitter Reddit Pinterest Share This Discussion

Bellevue Police asking for some help

Bellevue police shooting: What would YOU have done?

How Columbine turned a police Lt. into a gun control advocate.