Jlp122 said:
What about a Hellfire trigger? You are still required to press the trigger for each shot with those
Click to expand...

Better hurry,
if ya want the Incredible Stealth--it's so 'stealthy' that they can't even tell ya it's a trigger

The one stop shop for all Rapid Fire Trigger Systems in the world. we offer the latest in technology and innovation including our M249 SAW 10/22 kit.
www.rapidfiretriggers.net

I didn't read whole thread so someone probably mentioned it already but the single function of the trigger is not the issue with binaries in WA it's the 5 rounds per second which is in Washington definition. Any fast firing mechanism that meets the single function criteria but fires over 5 rounds per second is technically illegal in WA (don't get me started with Jerry M's finger ha ha).

Fwiw I like the binary on my 15-22 where you can waste a lot of .22 rounds for little money. For .223 it's expensive and a range toy imo unless you specifically practice 2 shot drills with it a lot (I don't). 2 shots are so fast they sound like one shot very often. I would not use it for defense or real work personally unless you put in enough range time to know its 100% reliable for 2 shot use. It would take a lot of range time of "2 shot burst" use to convince me it's better than semi (in binary "2 shot burst" use I mean, not "mag dump" type use which I wouldn't use at all for defense or real use personally).

Almost forgot, you can get one of these if you want to be WA law compliant. They r spendy though and definitely not precision oriented (but then neither is abinary trigger). For those outside wa, I wonder if 2 binary triggers could be used in these? 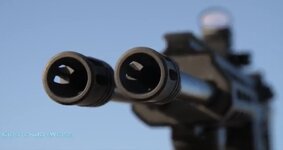 billdeserthills said:
Better hurry,
if ya want the Incredible Stealth--it's so 'stealthy' that they can't even tell ya it's a trigger

The one stop shop for all Rapid Fire Trigger Systems in the world. we offer the latest in technology and innovation including our M249 SAW 10/22 kit.
www.rapidfiretriggers.net
Click to expand...