spookshack said:
Well you are missing out my friend. If you do go the conversion route, a dedicated upper is your best bet.
Click to expand...

I think I'ma gonna go the S&W M&P route, as suggested by many above. Just make it a dedicated gun and be done with it...

The 15-22 can also be customized quite a bit. Be advised though, there are four proprietary parts unique to the 15-22. The charging handle, safety selector, hammer/trigger pins and barrel nut. Fortunately, those parts are available in the aftermarket.

spookshack said:
Better stock up on those 15-22 mags now….
Click to expand...

I was thinking exactly that, and why I should get meself summa deez before they can't be "imported" to this shhithole state anymore...
Last Edited: Mar 23, 2022

Oh yeah. That reminds me now. For those that choose to go with the CMMG, it will work with your standard charging handle... BUT.. I highly recommend getting the dedicated CMMG charge handle to prevent any possibility of a spent shell jamming the bolt up. Not highly likely to happen, but if it does it's a bit of a PITA. (Ask me how I know...)

I too experienced that with my CMMG kit I had. PITA for sure.

The Black dog drum is good to go but can bit a bit finicky when loading. Just have to go slow and make sure the rounds don’t “skip” a spot in the drum.

I just ordered one because I can’t afford to buy more 5.56 and my stash is finally dipping too low. I had a spare upper that I won and a spare monolithic plastic lower I bought on a whim, so I just slapped it together and ordered a cheap red dot and cheap IR illuminator to go with it.

I have a few thousand mini mags I bought a long time ago to run through it.

My buddy has one and absolutly loves it. Shoots it multiple times a week on his property.

I plan to just run it for 25 yards and in CQB or night vision training so I’m not too worried about accuracy.

I tried the CMMG .22 insert. Then a dedicated upper. The difference in accuracy was night and day. I finally settled on a DPMS II bull barreled upper to match the weight of my .458S.
My brother bought the S&W 15-22 and is quite happy with it even though, it is, what it is. It's not a true AR15. Not even the magazines are interchangeable with an AR15 lower. 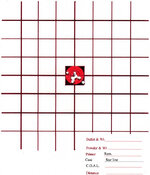 Maybe this helps gives an idea what to expect. It's not meant to replace a dedicated platform, but accuracy is still fairly respectable for what it is and the low cost involved.

If you run the cmmg conversion one thing you can do is make it a dedicated upper. I did it on a upper by using a cheap barrel, low pro gas block I drilled and tapped the tube hole the get rid of the tube then installed a plug. If you have or find a cheap conversion bolt its a option. I tend to like projects and found a cheap conversion kit so it worked for me. But if going from scratch a dedicated cmmg upper or s&w is probably the same cost or cheaper.

I just tried mine out this weekend for the first time. Most fun you can have with your clothes on as far as I’m concerned.

It shot under 4moa with mini mags, prone off my pack in the dirt with a red dot, so maybe better off a bench but more than enough for what I want to do with it. Shot 400-500 rounds over a few days in fairly dusty conditions with minimal jams once it broke in. It liked being lubed heavy with clp. I just blasted it in the ejection port.

It was great for running drills on steel or CQB drills at close range.

I just ordered a bunch of black dogs magazines for it.

I also ordered a bore buddy reliability kit, mainly for the charging handle plug to keep rounds from getting hung up on top of the bolt. 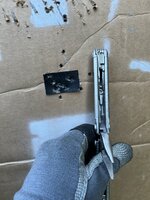 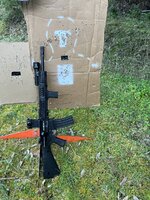 The CMMG kit comes in a few different configurations. The most popular version includes a .223 barrel adapter. However, CMMG also sells a version that includes a dedicated 22lr barrel paired with the same bolt but without the .223 adapter. This barrel does not have a gas port, is chambered in .22lr and has a 1:16 twist rate. This version addresses the issues with accuracy and fouling that occur when using the standard kit with a .223 barrel.

The M&P 15-22 is a lot of fun but is mostly polymer and not very durable, at least compared to an AR with forged receivers. A cheap AR upper, cheap handguard, and CMMG bolt with dedicated barrel might be slightly more expensive than a 15-22, but I would opt for the CMMG setup if you plan on using it for training rather than plinking.
Last Edited: Apr 5, 2022

I just have to say... Thank you very FRIGGIN much, Sobo!! (Is the sacracsm coming through enough?)

Got me thinking about our CMMG's and reminded me that I had once toyed with the idea of doing a dedicated upper, too. Following the thread.... prompting me to look around a bit... I now have incoming a sportster stripped upper, another CMMG bolt with the barrel collar (also comes with another 3-25rnd'ers), another poly CH, 3 buffer plugs (need 2 for the other bolts we already had), a barrel on back order and waiting for the affordable hanguard I want for it to be back in stock.

Thanks to NWFA though I have that $12 red dot deal to try on it and a member gave me a fair price on an MBUS set, so.... Whoopee!! I brought the cost down at least a fraction.

Interesting though. The buffer plugs are 3D printed off ebay. We'll see if they hold up or not, but all 3 only cost as much as buying 1 through borebuddy.

I tend to agree with zcap. I prefer the upper on an AR receiver over any of the dedicated poly options. It's not "cheaper", but I'm not interested in match level shooting, anyway (I have other rifles for that). The drop in's in our 5.56's are a kick and already do a fine job. A dedicated will simply be one step up from that.
Last Edited: Apr 6, 2022

I built a dedicated 22lr upper out of one of these:

Everything you need to convert your existing upper to a dedicated .22LR. Just purchase a magazine and you are ready to g

I use it on my SBR lower with a 22 suppressor. Really fun.

Yarome said:
I just have to say... Thank you very FRIGGIN much, Sobo!! (Is the sacracsm coming through enough?)

Just saw this. Glad I could help deflate your wallet.

Everything you need to convert your existing upper to a dedicated .22LR. Just purchase a magazine and you are ready to g

I use it on my SBR lower with a 22 suppressor. Really fun.
Click to expand...

They have these for 180$ at Oregon rifle works. I only saw 2 left after I bought mine.

sobo said:
Just saw this. Glad I could help deflate your wallet.

If you only knew the depth of what you did!

The timing to revive the thread couldn't have been better though. Just today I received all my borebuddy goodies.

New toys you have'nt been able to shoot yet for whatever reason.....
2 3

Anyone need any extra spent cartridges? Like 17k lbs+ 😲

Found out I have a lazy, wiggling pinky!

Supreme court guts one of the alphabet agency's reach, others to follow? AFT?
2