Forgot to mention the one's circled in white in the bull's-eye that is 10 rounds Round were hitting a little to the left so i clicked it one click to the right you can see it walk over to the bull's-eye.

It's not unusual to have one type of ammo suck in a given rifle. Nutnfancy tested an AR recently that loved 2 brands and shot sub MOA yet hated the more expensive brands

That is one thing I would like to try is a heavier grain bullet. The 55gr VarmintX should dust off a yote good enough.

So, Is the ammo in question also 55 grainers?

It's 62 grains with a built in wobble tip/"penetrator". 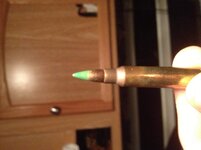 The problem could very well be a slow rate of twist barrel. Just cant stabilize the long pills.

Look at the bright side.. they'll be just the ticket for machine gunning AR500 beer cans at 25 yards.


I would think a 1:9 would handle them a bit better than group size indicates. I'd try that ammo in a faster barrel before organizing a lynch mob after AE.

Yeah it very well might be that it's not the bullet weight it's just the bullet and or powder combo. maybe a different brand bullet in that weight my gun might like it better.

don't blame the ammo, it's your barrel twist rate.

also this is why you try out the ammo first, before stack-up.

Yes I was just looking up some info on the one in nine twist and it looks like the 62 Gr is its upper limit in most cases.
U

coyoteman5 said:
View attachment 73768
The holes Circled in red are the American Eagle XM855 I've never seen Emil shoot that bad before. The rounds circled in white are Winchester VarmintX.
The rounds circled in blue is another brand of American Eagle 50 gr jacket hollowpoint. The rounds circled and green is Remington UMC in yellow box.
The rounds not circled are a mix of all the other rounds but the XM855. All the other rounds are 55grs
This is out of a bushmaster AR varminter with a 4.5 x 14.5 Leupold scope. The Boy that American Eagle XM855 ammo is not even good for plonking that ammo sucks out of my AR. Look forward to start reloading for it in the future.
I hope the photo uploaded if it doesn't Ill be back.
Click to expand...

FWIW My BCM's all have 1 in 7 twist and shoot these just fine.

BAMCIS said:
FWIW My BCM's all have 1 in 7 twist and shoot these just fine.
Click to expand...

My M&P 15 does great with the XM855. It is part of my reserve for SHTF scenario.