Other State Alyssa Milano: ‘I Have Two Guns in My Household for Self-Defense’ 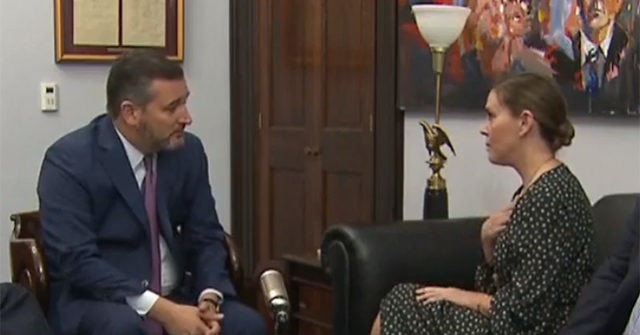 Alyssa Milano: 'I Have Two Guns in My Household for Self-Defense'

Actress Alyssa Milano revealed she has two guns in her home for self-defense during a debate Tuesday evening with Sen. Ted Cruz (R-TX).

She’s annoying, BUT at least she was willing (and followed through) to actually meet IN PERSON to engage in discourse, instead of just engaging in remote punditry without that interpersonal communication feedback that’s CRUCIAL in effective human interactions. This is actually a “big deal” and may be the one (loose) thread that starts to unravel the entire tapestry of the “celebrity” anti-2A bandwagon... lets cross our fingers and keep encouraging this type of “conversation format”.

After watching the whole hour long thing I got a little frustrated. First it seemed like three people ganging up on one. They wouldn't allow him to answer their questions completely. They were highly charged and emotional. And they kept saying they didn't want to infringe on people defending themselves with guns but never said what they did want.

And the things they acted like they supported would infringe on law abiding citizens so isn't it disengenuine to state otherwise?

All I saw was three people that bought into the media hype and got themselves all worked up that appeared to panic and want action but wouldn't specify exactly what.

I didn't hear any mention of things actually becoming safer over time. I did hear mention that they felt things weren't working and appeared worse over time.

The fact is the person is often a law abiding citizen right up until they perform a criminal act. No laws will stop that, and the only defense is for the victims to have teeth.

I don't mean just guns, pepper spray, taser, knife, hell even a fire extinguisher will at least blind them long enough to get away.

And no talk of compromise. And they acted like they supported a ban on AR15s which have been around since the 70s. The weapon of war BS only designed for killing.

Honestly what gun isn't patterned or created after a military weapon? Bolt actions are based off a WW1 Mauser action. Even shotguns have roots in trench guns. A lot of pistols are patterned after the 1911 which is a WW2 gun. I would surmise most guns have their roots in military weapons and are created for the purpose of killing....otherwise they wouldn't be very effective would they.

The AR is based on the M16, just like most guns are patterned after military weapons.... So.... It's a stupid point that keeps getting repeated.

WoodsPlinker said:
The AR is based on the M16, just like most guns are patterned after military weapons.... So.... It's a stupid point that keeps getting repeated.
Click to expand...


Actually and contrary to popular belief, the M-16 was based on the AR-15.

Actually the M-16 was patterned after the AR-15.

Kruel J said:
Actually the M-16 was patterned after the AR-15.
Click to expand...

Nobody is trying to impact our self-defense said the Marjory-Stoneman father. Really? All the Dem 2020 candidates have said they will have us turn them in. My bedroom is defended with an AR15 pistol. I believe it to be an excellent choice for that use, as it is high capacity capable, light and laser mount, better at aiming, and soft point bullets that won't overpenetrate walls and go into my neighbors homes. Are there other choices... yes, but none that meets my criteria as well. Why should I be denied my choice of home defense firearm when I have done nothing wrong???

Milano having two guns at home for self-defense... gun control is a Weaver grip!! Or maybe she has shotguns and believes in the Biden method... you know, shooting up in the air or thru the door to scare them off!

I believe Alyssa Milano should be able to use any means necessary to defend herself and choose whatever weapons she feels comfortable with doing so (that goes for everyone) all I DEMAND, (that's right, I'm not asking) is to be extended the same courtesy.
Last Edited: Sep 12, 2019

I would like to be her ONE BIG gun!!

Milano used to be a babe... now she is just a has-been looking for a way to be relevant!!!


trevi said:
I would like to be her ONE BIG gun!!


I wouldn't touch her with Stomper's Richard!!!

bbbass said:
Milano used to be a babe... now she is just a has-been looking for a way to be relevant!!!

I wouldn't touch her with Stomper's Richard!!!
Click to expand...

A man can fantasize. lol

trevi said:
A man can fantasize. lol
Click to expand...

Who TF is Alyssa Milano anyway??? Got me by the nuts. I live and play in the woods....

A has-been-hottie, trying to get 15 minutes of fame again in a male dominated topic.

trevi said:
A has-been-hottie, trying to get 15 minutes of fame again in a male dominated topic.
Click to expand...


Just another nobody celebrity that thinks she knows better on how you should live. You're better off stacking wood or pissing in the wind than listening to her.

trevi said:
I would like to be her ONE BIG gun!!


If you have Hulu, watch some of the show "Charmed"... other than some nudity in a few flicks that was about it for her career!


Todd, if you're open minded.

Oregon Anyone have video on the deadly portland protest shooting tonight?
17 18 19

Other State Next time my wife tells me she has a headache, I won't doubt her.