I had heard good reviews about the cold steel SRK camping knife so that got me curious. So I bought a bushman ($17ish) and an outdoorsman lite (I think it's called - $25ish). Passing along first impressions if anyone interested is in these types of knives fwiw.

Bushman I like a lot actually cuz you can attach a rod/pole/stick to it. Comes with Ferro fire starter rod. Could be a pike, spear, shovel, knife, machete, entrenching tool?, etc. I think it's same steel as SRK but would have to check. It's super stiff so I don't think it would bend easily which is something I was wondering about. I'm going to put a handle on it and do some hacking on bushes and see how it compares to a machete. I'm curious about traditional brush axe vs machete vs this brush blade vs hatchet/tomahawk for brush clearing type of tasks.

Outdoorsman lite is full tang, bone breaker on spine, grip has some give, not hard plastic. German Krupp 4116 steel. Krupp has been making steel forever and has built everything from the wwI big Bertha canon to pretty much everything else (railways, tanks, ships, artillery etc.). Krupp three ring barrels were the best in the world for shotgun and rifle barrels at one time (Not that this is the same steel in the slightest).

Both lock into holster solidly, you have to really yank on them to get them out.

Can't say much for testing yet other than both sliced through cardboard like butter. I woudl say that outdoorsman was best for cardboard of the roughly 10 knives that I have tried. A lot of that is due to size and blade geometry I think. But it's new so who knows I would expect edge retention to be poor and toughness very good but just an assumption. The bushman is less like a knife and more like a machete as far as beveled edge. Both are from bladehq, they may be cheaper somewhere else I don't know.

The Cold Steel Bowie Blade Bushman knife might be one of the strongest survival/outdoor knives in the world! There is no joint or seam between the blade and handle, which gives the Bushman unparalleled strength. The single piece SK-5 high carbon steel is cold forged, heat-treated and tempered to...

The Cold Steel Outdoorsman is a sturdy fixed blade knife. It features a black polypropylene handle and a cordura sheath. Get yours at Blade HQ!

Red arrow indicates hole where u can put a screw to secure a handle/pole/stick: 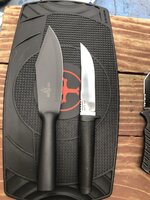 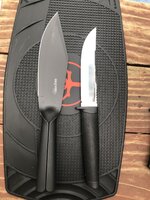 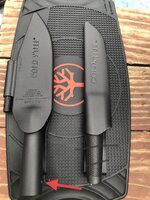 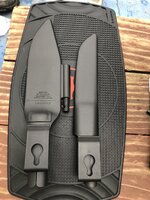 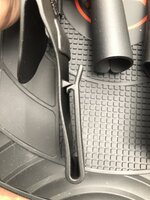 Ps I noticed the outdoorsman also comes in a more expensive version which uses San mai steel. As I understand it that one is a laminated steel with hard steel (VG10) in the middle for edge retention and soft steel on the outside for toughness/strength. Similar to how they make Japanese swords. That one is like $150 though. Neither of those handles bother you? I've skipped the outdoorsman once or twice because I like the srk handle design better. I do like that blade tho.

Neither of those handles bother you? I've skipped the outdoorsman once or twice because I like the srk handle design better. I do like that blade tho.
Click to expand...

On the handles for the brush knife, I've got tons of bamboo around I think I'll chop some down with the knife, turn it into a handle that is purposely too long, then keep cutting it shorter until it feels right for a one handed brush axe/machete thinga ma jigger. If a person wanted it as a knife probably wrapping it with something would be the way to go I guess?

The other one I don't know on the handle. I guess I was expecting cheap hard plastic that could potentially shatter. I'm just glad it has some give to it. Won't know much really until I use it.

Found this pic in the internet. For when you want go full Zulu! I found a broken down old hoe so I stuck it in there. 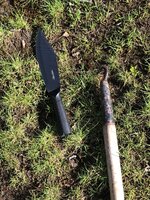 ilikegunspdx said:
I found a broken down old hoe so I stuck it in there.

ilikegunspdx said:
I found a broken down old hoe so I stuck it in there.

Did brief test against machete. Machete splintered, bent broke smaller bamboo and bushwhacker knife cut it cleanly. But not worth much as an observation as that machete is not that sharp. so I'll need to sharpen machete then compare. Front cut on green bamboo is from knife. 6 inches back from that is the damage done by machete. Again not a fair comparison but I'm to lazy to sharpen machete right now. 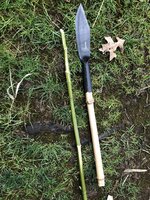 Also re handle it seems having your hand half way on the metal and half way onto whatever you are using for a handle is the sweet spot. Have enough leverage to remove material but enough control there too. Holding it only on the Metal feels like it's choked up a bit too much to me.

I wanna know all about it...

Where in the world is Carmen San Diego?

You got semi arid river valley, rocks with lichen , and green bamboo?
I am intrigued.

I wanna know all about it...

oooooh no. Not even GSG version. That's a BB gun machine gun. Put there for scale as it was laying there.

Pretty sure he's in Portland...

Knobgoblin said:
Where in the world is Carmen San Diego?

You got semi arid river valley, rocks with lichen , and green bamboo?
I am intrigued.
Click to expand...

Flymph said:
Pretty sure he's in Portland...
Click to expand...

ilikegunspdx said:
oooooh no. Not even GSG version. That's a BB gun machine gun. Put there for scale as it was laying there.
Click to expand...

Cause we all know exactly how big an MP40 is... not that I don't but, what was my point?

Flymph said:
Cause we all know exactly how big an MP40 is... not that I don't but, what was my point?
Click to expand...

You mean not everyone has watched "the guns of navaronne" five times? Maybe the dirty dozen...

Knobgoblin said:
But , I see no blue tarps.
Click to expand...

You can't own blue tarps in Portland. They all will get stolen within hours.

Saw this on field and stream website. Apparently it does work as a spear. 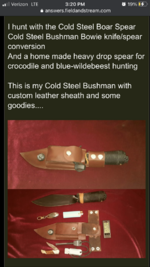