I'm a long-time .41 Mag fan, only recently interested in Henry rifles. The Henry company hasn't been around all that long, only since about 1996. We've all seen their brass-framed rifles, pretty but I wasn't interested in what I considered cowboy replicas, maybe a step above Italian black powder guns. So I kinda had this bias against Henry. Until I watched a video tour of their factories. They have two, one in New Jersey, another in Wisconsin. Nice, new, spacious, clean, modern places. Lots of new manufacturing equipment including electronics. Lots of quality control procedures and tools. I was impressed. As a result, I decided to take a look at their products at their online site. That's how I discovered they make several models with steel frames and round barrels. One such was a lever action in .41 Magnum.

I've wanted a rifle in .41 Mag for some time as I've got two Smith & Wesson Model 57's. Marlins have gotten to be hard to find and costly when found. When I saw the pictures of the Henry Big Boy Steel, I got interested. Next, I went to a couple of retail stores to look at Henry products. As might be expected, they didn't have one in .41, only .357 and .44. The .41's don't get called for all that often for a stocking dealer to keep one on hand. Using those on hand, I was able to see that the Henry Big Boy Steel was a quality firearm. Next, I went on Gunbroker and found an in-state dealer who would order me one at a discounted price and that's what I bought.

The Henry BBS has definite Marlin influences. What it doesn't have is a side loading gate. It loads through the side of the tube near the opening. The cartridges are held under tension from a spring in the removable magazine tube insert. Which is also like a Marlin - some of their .22 rimfire designs. Some people might not like this design, but I find it easier on older, fumbly, arthritic fingers. As I've gotten older, I find side loading gates to be pinchy and a bit difficult. 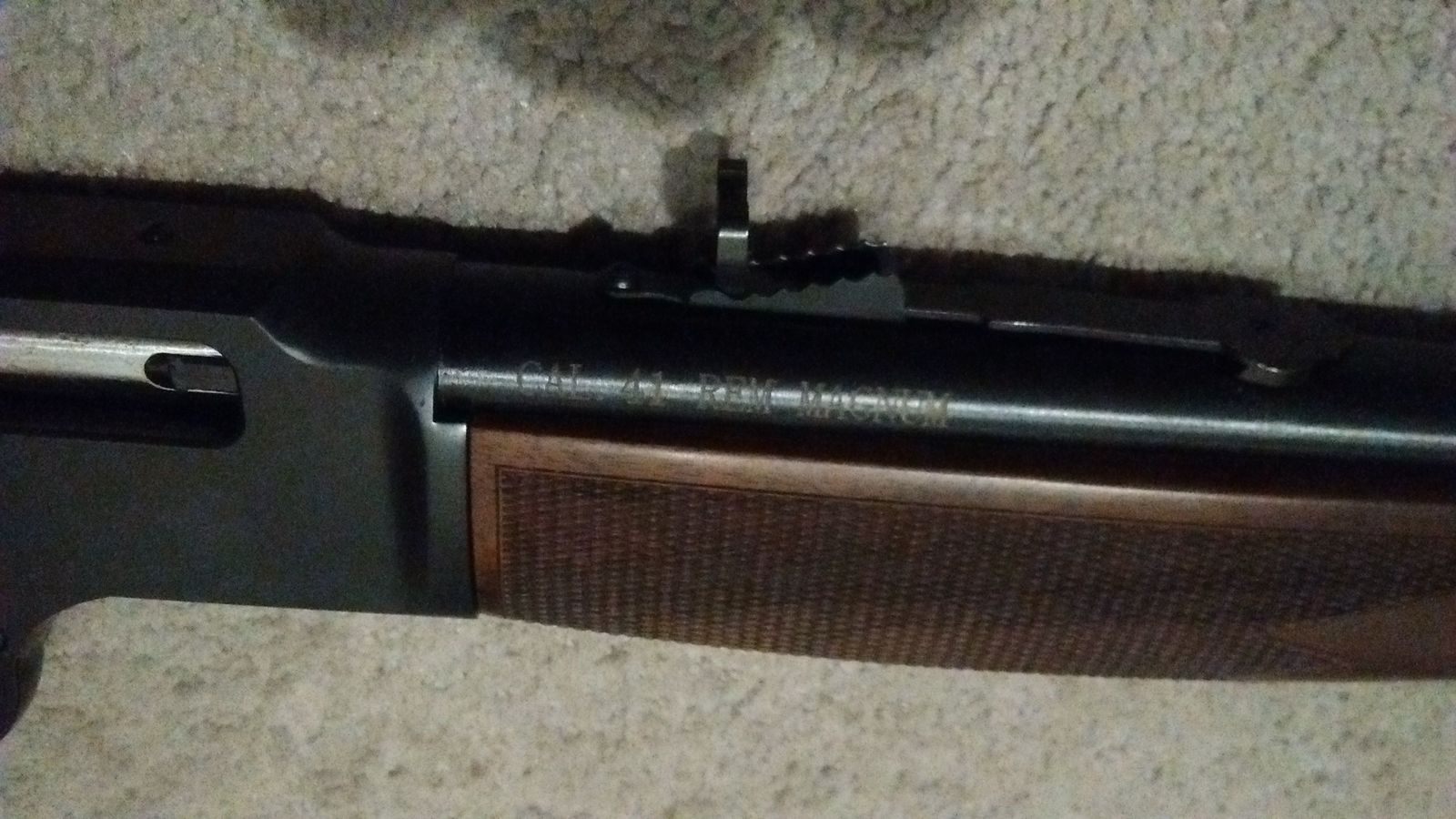 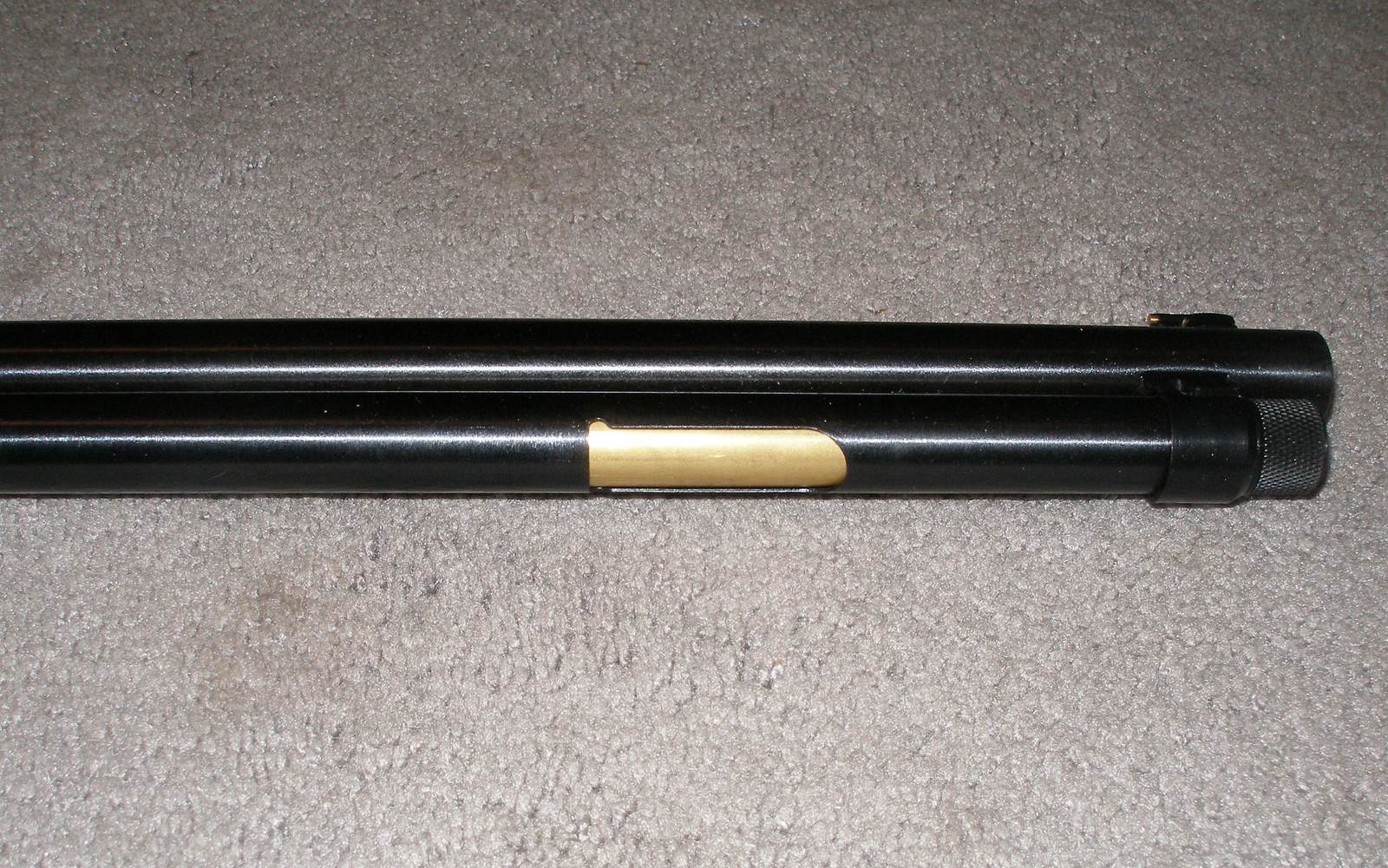 On the way home after I'd picked the rifle up, I was able to stop by the Plantation Gun Range in Whatcom Co. I tried the new Henry out and wasn't disappointed in the 20 rounds of soft-ball ammo that I keep on hand for the revolvers. I'm going to load up some ammo to higher velocity with jacketed bullets for this rifle.

The Henry rifle in .41 Mag has been made for about two and a half years. The serial number of mine is 3,5XX, which reflects that they don't make all that many of these. I've read that most of the .41's sold go to Texas. Mine has a 20 inch bbl., you can get them with a 16-1/2 inch bbl. that has a larger lever loop.

I like it! I have been interested in the .41 mag for a long time because it makes a pretty good handgun / rifle combo, to carry just one type of ammo. From a rifle, the .41 mag has more energy than a 5.56.

I would really enjoy seeing any accuracy info you achieve.

Some people might not like this design, but I find it easier on older, fumbly, arthritic fingers. As I've gotten older, I find side loading gates to be pinchy and a bit difficult.
Click to expand...

I often mention there is a definite advantage to a tube load system with pistol length cartridges over a loading gate system - but the gate does favor the longer, rifle length rounds.
The gate can be a finger pincher with the shorter rounds and I speak from experience having owned a Winchester Trapper in .357 - and now a Brass Henry in .357.
The Henry design is a great rifle and not intended to be a 'replica' of anything in particular but more of a 'Renaissance' of a typically American design of the lever action rifle.
They are a bit 'quirky' but overall a quality rifle with a smooth action and a great trigger out of the box.
However......
I hate to be the bearer of bad news and I HOPE it is not a 'sign of things to come' but recently Henry has had some manufacturing issues lately and there are some rifles leaving the factory with some problems that SHOULD have been caught during QC or whatever inspection process they have.
Rough barrels with chatter marks near the crown have been reported by more than a few owners and SHOULD have been noticed by the prospective owner when they were looking it over at their LGS before buying.
My YOM 2015 Henry was EXCELLENT at the time of purchase although it did get an nearly 45 minute look over and barrel cleaning before I bought it.
I would still highly recommend a Henry as their customer service is beyond reproach and they have (and do) go above and beyond to take care of any problems with owners well after the sale.
Like anything a good inspection prior to purchase will go a long way to ensuring owner satisfaction!
OP

When I bought the .41 Henry, I had to take a chance on what I was getting. The rifle had to come from warehouse stock because of the caliber. However, I've given it a very good looking over, plus testing it at the range and I'm satisfied. The barrel in it looks okay. I'm familiar with the rifling chatter marks on some newly-made firearms (Colt, take heed).

Old eyes go along with old fingers, so I'm thinking about one of the aftermarket aperture sights for this rifle. Skinner is one design but there are others.

Skinner is one design but there are others.
Click to expand...

A $39.95 William's 336 WGRS mounted in reverse and the windage blade reversed works like it was made for it... 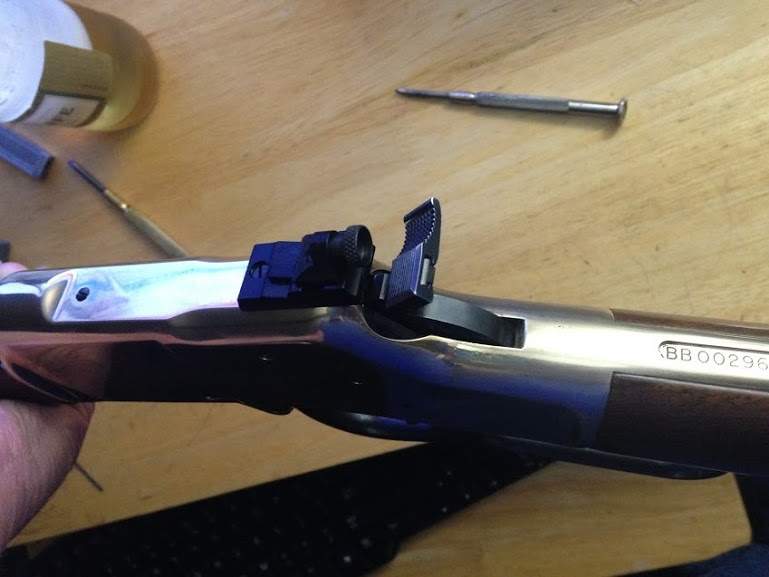 I see you have the brass receiver. I wonder if the Williams will mount the same on a BBS. If so, I'm for it. The Williams is multiples less expensive than Skinner, et al.

I believe the steel has the same screw configuration with the two rear on 1/2" centers.
Never used or owned one but I don't really care for the Skinner sights. Pretty speedy for what they are and I don't like the way they adjust. I prefer the economy and practicality of the Williams sights and have them on other rifles.

Looks like you might have got a good one, congrats. Henry quality these days is so hit or miss I’m not sure I’d buy without looking one over first. I had a marlin in 41 back in the 90’s. Kick myself for Srlling it now 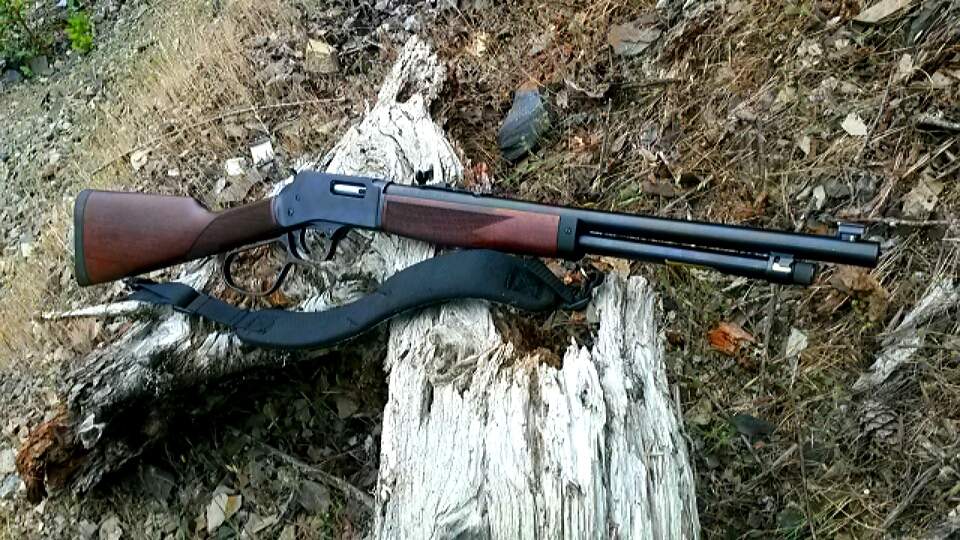 This is my grouping at 80 yards open sights I've since mounted the Williams 336 WGRS aperture sight on my .41, reversed as shown in post #5, above. It changed vertical/elevation point of impact, so I needed to adjust it downward. Since the sight base is reversed and the aperture is screwed in from the opposite side, it didn't have enough clearance. So I had to carefully grind a bit off the bottom edge of the aperture ring. It worked out fine. I don't mind a little grinding on a $40 part.

Accuracy in my .41 is about like Magnumjohn's .44 at the same range. At least with me shooting it. My last experiment with it was shooting solid zinc bullet loads, shot fine.

Thanks for the reports. I've been dithering on one of these far too long.

I've been eyeing those 41 Henry's. I have a Marlin in 41 mag. Love it, and I still hunt with it on occasion. It likes the 250 gn Performance Casts with a healthy load of H110.

I also load some plinker 210 SWCs with about 8 grains of Unique. They are fun to shoot and probably would make a fine hunting load too.

If you decide to get serious with one just make sure you give it a serious inspection - and this includes a basic bore swab & look with a light.

Look at everything - function check with snap caps to include loading and cycling.

Thanks RVTECH, I will. Hit and miss, eh?!

MOST of what I am reading is from failure by people to adequately look it over before buying.

I read of stuff that should have been OBVIOUS (to an experienced gun owner) before leaving the LGS but then they whine about it later and call Henry, who is pretty good about service - even if something that may have been post delivery to the LGS and take care of it.

A couple years ago I 'stumbled' on a 'fix' for a problem that has plagued probably 70+% of Henry owners - and specifically the PC owners - that of the lever being 'kicked' open when trying to slide the load tube closed. I read about MANY returns to the factory for this issue only to have the rifle returned with the same problem.

Well, part of the problem is owners failing to remove the INNER tube and cleaning the OUTER, stationary load tube to shotgun bore shininess.

The more acute problem was the square cut rim of the inner load tube catching on the rims of cartridges while being pushed down and pushing them into the action kicking open the lever.

A couple turns of my RCBS deburring tool in the end of the tube beveled the inside and the tube slides down over the rounds slicker' 'en snot!

Just make sure you look over a potential purchase completely!

I got these ranger point precision peeps and they definitely improve your shooting...I can Tag a 8 by 8 steel plate at 130 yards 5 out of seven average but sometimea more...love the sights