The roof tent is not included in the sale.

Hello, I have a 1996 Tacoma Xtra cab 3RZ 5-speed 4x4 for sale. In the last year I have replaced the clutch, flywheel, fuel filter, injectors, shifter bushings, air filter, windshield, and all of the fluids. It has a new Kendood single din head-unit USB/AUX and new speakers from Sonic Audio in Tualatin. It has new 31" mud terrains. It has a color matched SnugTop canopy with crossbars. I have 2 keys for it.

The engine was recently compression tested at 180 psi in each cylinder so there is still a ton of life left. I have pictures of each cylinder test if you are interested. It has a small oil leak around the front of the oil pan- I reached out to my friend who is a Toyota master tech up in Washington and he said not to worry and to just top it off every once an a while. I do regular oil changes at 3k miles and only use full synthetic.

It has tube bumpers and rock sliders all the way around. The front bumper is from Addicted Offroad. It is mounted to a Trail Gear mounting plate. The rock sliders are from CBI and the rear bumper is from Trail Gear. I had a custom diamond plate box made for the front bumper to keep straps/rope in. It has LED turn signals in the front with an aftermarket flasher relay installed.

It is wired for and comes with a handheld/wired CB radio. It is from Midland. It also comes with 4 Hella flood lights. They are all wired to 1 factory rocker switch.

It has a leveling kit that was added by the previous owner, I have checked the ball joints and the CV axles and all seem to be in good condition. No cracks in the rubber.

Cosmetically it has scratches outside and a couple of dents. It has a tailgate dent from the previous owner and has the classic Toyota-driver's-seat rip. It has bench style seating in the front. The door panels, carpet, and headliner are in great condition. The dashboard is not cracked.

It has a clean title. I have lots of pictures and can take more. Thanks 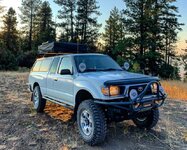 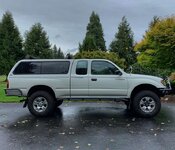 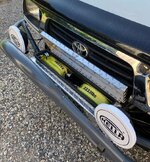 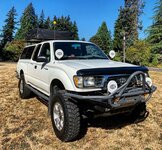 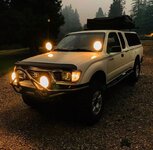