The gun is in 90% or better condition. This is not an armory re-work. This gun has been inspected by .45 collector and U.S. Navy (Retired) John Holbrook as 100% original. Comes with two matching L & G stamped .45 magazines. Every part is era correct. Asking $1000. First i will take it gets it.

Consequently some of the parts of the early pistols were made using Singer supplied tooling and fixtures. Careful examination of Early Remington Rand pistols will reveal striking similarities in some of the parts to Singer made parts such as the triggers and mainspring housings. The first 255 production pistols where accepted by ordinance inspectors in November of 1942. Initial shipments appeared to perform satisfactorily, but subsequent tests performed by Ordnance Inspectors revealed serious problems with parts interchangeability. In March 1943 James Rand Jr., stopped production due to a high rate of Parts Interchangeability Test failures. Only after a change in management and a thorough review of the inspection and manufacturing operations was production finally resumed in May of 1943. Throughout production Remington Rand aggressively attempted to innovate and improve the production of 1911A1 pistols.

By March of 1945 they where building the lowest price pistol in the war effort and quality was considered second to none. By the end of the war Remington Rand had produced over 875,000 pistols, almost as many as Colt (628,808) and Ithaca (335,467) combined. Reference Charles Clawsons Colt .45 Service pistols. 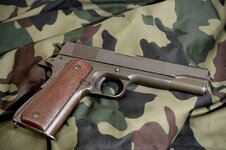 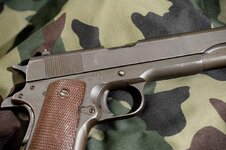 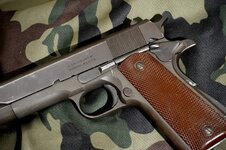