This happened a week ago and I never heard a peep about it on the media.

Basically, a land-based hurricane hit Iowa and destroyed a third of the state's crops and it was not considered newsworthy. Crazy. 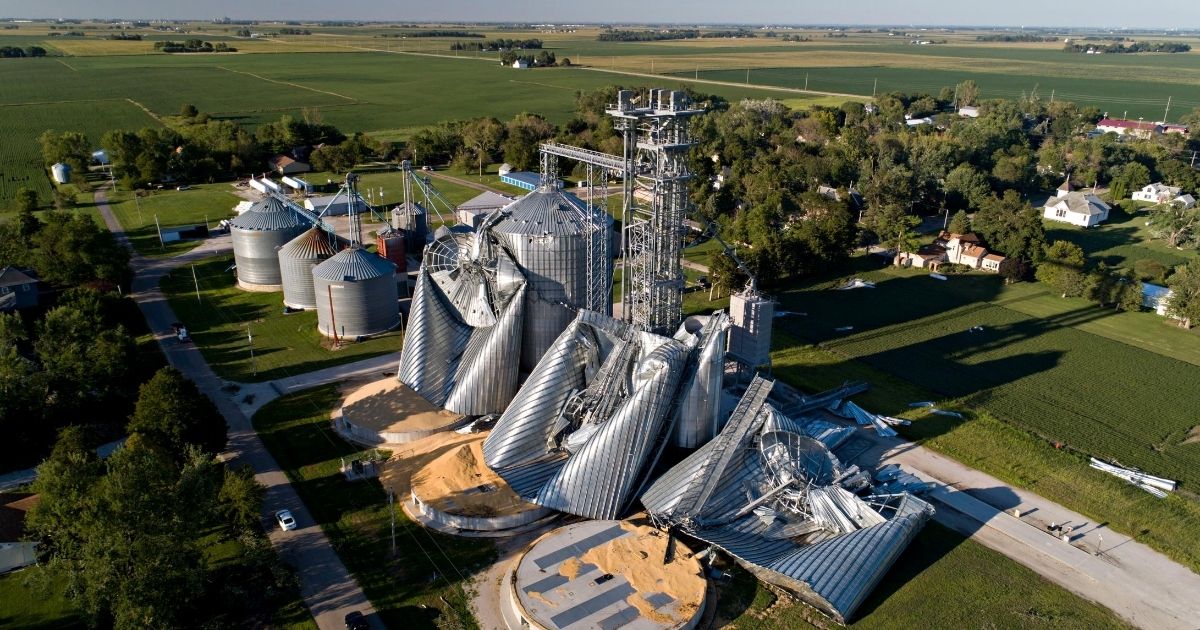 Destructive Windstorm in Midwest Causes $1 Billion Worth of Damage, Leaves 600K Without Power

A derecho moving at speeds over 100 mph blew through the Midwest on Monday, causing incredible damage to crops and property.

A powerful storm tore through the Midwest on Monday, leaving devastation in its wake.

One meteorologist told The Washington Post that Illinois and Iowa alone could have $1 billion worth of damage to crops, homes, businesses, vehicles and infrastructure.

During a Tuesday news conference, Iowa Gov. Kim Reynolds said the storm leveled 10 million acres of Iowa crops, damaging or destroying nearly a third of the state’s 32 million acres of corn, soybeans and other crops, according to the Des Moines Register.

Having lived several years in the area where the storm was most intense, I was surprised none of my friends from there had posted about it on social media. Then I realized that they are likely still without power and internet. Doh!
C

I saw that news story on many, many online news websites.

The regular ones (Mass media.) and on some alternative news too.

It was on OTA-over the air free news stations too. People who CHOOSE to not have cable or a dish for boob tube (TV) reception = me.

Example: ABC, CBS, NBC and local regular Fox stations. (NOT the Fox one that you have to pay for.)

They showed it on 'weather' segments too. So it was on the news (National and local - MT.) and online too.

A friend of mine who drives a truck across the country, retired Army, and I spoke about it too. He heard it on the radio (AM) and he gets his news from some fancy telephone/computer (Smart phone?) while he is out on the road too. I asked him if his Dad's farm land or his small farm got hit in the Great Lakes region but they got no damage there. His 75 year old Dad went to school with my late husband. Same age. The Veteran friend built a house on his family's land and is north of my former, large brick house that I built with my late husband by one township/country road. They do NOT live in Iowa or in some of those states that got hit with weird weather.

I believe that this news story was on foreign news websites too. The UK has a ton of U.S. news, Russia does, Europe does, etc. Heck, even the news from the Mid East tells more news about the USA compared to some so called 'news stations' here in the US of A.

The national and local news have IGNORED some VERY important news that needs to be told - I will admit that but I did see the story that you mentioned above.

New York (WABC), some New England and Mid-Atlantic radio stations spoke about this too. Online radio, live and podcasts, that are regular AM - talk and news stations, mostly conservative, a bit of Libertarian and some are more moderate in their views too. I listen to them a lot and they tell much more NEWS in a brief time than most LOCAL so called talk/news (LOL) radio stations here in MT talk about in one hour with the same old callers and ill informed radio 'hosts'.

Sometimes, I think that the 'local and national' news hosts on the boob tube or on the radio... need to study and READ more before they go ON AIR too.

Some of them are really ill informed or they never follow up on a LOT of their stories. That includes what is going on in FARM or ranch country and MAIN STREET USA.

But all they lead with is the !!! flu news (Almost 24/7 non stop.) and some other things (NOT real news and bs 'feel good stories' that do NOT matter while they ignore stuff that should be discussed!) AND they ignore some things even in this state that WILL be on the ballot. Heck, they do not even call the Republicans, Democrats and others on some of these ballot issues.

On top of that, the ones running are NOT discussing some of them either!

What a bunch of ill informed or deliberate R/D/etc. CON artists!

Weather channel had a good presentation on this event and really dug into crop damage so great some farmers may not recover. Farmers claim to have lost the ethanol and Chinese corn markets, and now the straight line winds have devastated their marketable crops. One wind gust was reported at 112 mph.

Holy crap! Why wasn’t this in the news.
Good thing most farmers have crop insurance

DO NOT WORRY Ashton Kutcher has stepped up and blamed President Trump for not shoveling money into Iowa fast enough after this event to have prevented it. All will be back to normal soon.

Waiting for the voice of the archangel
Diamond Supporter

Yeah but BLM and The Rona.

Oregonhunter5 said:
Why wasn’t this in the news.
Click to expand...

What is the full meaning of news?
Notable Events, Weather and Sports

You want to know the meaning of NEWS acronym. The abbreviation NEWS stands for “Notable Events, Weather and Sports”. ... According to Oxford dictionary, “News is newly received or noteworthy information, especially about recent events usually a broadcast or published report not previously known to someone.”Dec 17, 2019

I think I remember some of that from many years ago.

Stock up on hominy.

Plus side; they won't have labor shortages for harvesting what is left.

Heard about the storm, didn't hear or think about the crops.

Oregon and PNW crops, what they look like, how to prepare.
2 3 4